Following important steps taken in Belarus and Ukraine to protect peatlands at the heart of Polesia, conservationists want to see the region awarded UNESCO status.

Ahead of World Wetlands Day (WWD) on 2 February, conservationists from Polesia – Wilderness Without Borders – an Endangered Landscapes Programme supported project– are calling for Europe’s largest wetland wilderness area to be included on UNESCO’s World Heritage List.

The recent signing of a resolution to establish the Pushcha Radzivila National Park in Ukraine and last year’s expansion of the Almany Mires Nature Reserve in Belarus have provided a much-needed boost to efforts to protect Polesia, a stunning transboundary region that straddles Belarus, Poland, Russia, and Ukraine.

But threats to Polesia from human activities still loom large. Deforestation, mining, farming, and plans to construct a major waterway through the region could lead to irreversible environmental damage, experts warn.

Attaining UNESCO status would see the central part of Polesia recognised alongside the Serengeti National Park, the Great Barrier Reef, and the Iguaçu National Park on the international list of sites with outstanding universal value.

Campaigners say that achieving designated protected status for the region at an international level would help ensure the future of the largest and most important inland wetland region in Europe. It would also protect the transboundary landscape’s essential ecosystem services, which underpin hydrology, store immense quantities of carbon, and have significant potential for ecotourism.

“We want to identify and classify key areas that are not currently recognised as protected landscapes, including primary forests, other forests of high conservation value, and sites home to rare birds and mammals,” says Olga Yaremchenko of the Ukrainian Society for the Protection of Birds (USPB).

“There is an astonishing diversity of plants and animals in Polesia. The presence of species such as the greater spotted eagle, the eagle owl, the great grey owl, the pygmy owl, the black stork, the lynx, and other rare species have been identified as key indicators when identifying priority areas for such protections.” 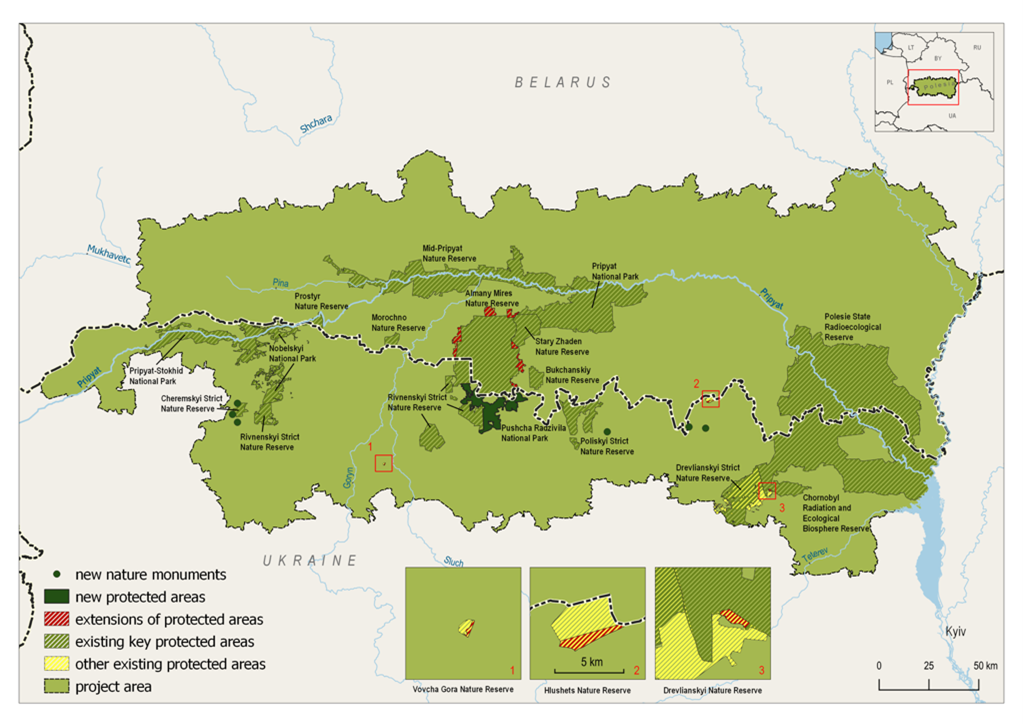 Since the start of the Polesia – Wilderness Without Borders project in 2019 almost 35,000 hectares have gained legal protection status. Pushcha Radzivila National Park (dark green area at the centre of the map) is the area’s latest designation, while areas in red show the 10,000 hectare expansion to Belarus’s Almany Mires Nature Reserve which now spans 104,000 hectares. Credit: FZS

During the past three centuries, close to 85% of the world’s wetlands have been drained to provide land for housing, industry, and agriculture. Those that remain are vanishing three times faster than the world’s forests.

Large parts of Polesia, on the other hand, remain in near-pristine condition. It is one of Europe’s last truly wild places. Few places on the continent provide as much space for flora and fauna to survive and thrive.

Larger in size than an average European country, Polesia is often referred to as the ‘Amazon of Europe’. The region is home to an immense patchwork of forests, peatlands, floodplains, and rivers. In springtime, snowmelt turns much of the landscape into what looks like an endless lake.

These vast habitats provide sanctuary to a number of vulnerable species, including eagles, wolves, bears, lynx, and bison. Hundreds of thousands of migratory birds pass through the region. In the springtime, numbers of at least 150,000-200,000 Eurasian widgeons, 200,000-400,000 ruffs, and 20,000-25,000 black-tailed godwits have been recorded in Polesia’s Pripyat floodplains alone. It is a key breeding ground for many globally threatened species. 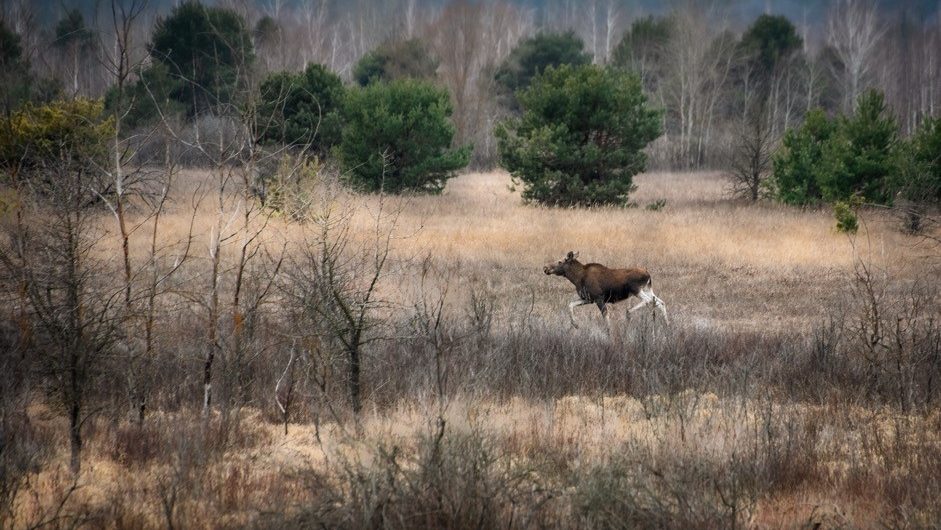 However, like many wetland areas around the world, Polesia is threatened by human activities. Besides impacts from deforestation, mining, drainage for agriculture, and infrastructure developments, the adverse effects of climate change are further reducing the resilience of its environment.

Polesia has also come under intense focus as a result of plans to construct Europe’s longest waterway through the region. Known as the E40, the waterway would connect the Baltic Sea with the Black Sea, stretching some 2,000 kilometres from Gdansk in Poland to Kherson in Ukraine. The construction could destroy much of Polesia’s vast wilderness, with researchers predicting far-reaching implications for both humans and nature.

It has led to a race against time for conservationists to document the region’s biodiversity in detail, and make the case for its protection.

Many parts of Polesia are of international importance for nature conservation and have been recognised as UNESCO Biosphere Reserves, Important Bird Areas, Emerald Network, or Ramsar sites. During the past 12 months, important steps have been taken at the national level to protect further areas.

At the turn of the year, a resolution was signed by Ukraine to establish the Pushcha Radzivila National Park in the heart of Polesia. Formed largely of bogs and transitional mires, the 24,000 hectare protected area secures better protection for the area’s wildlife, improves the connectivity of protected areas, and also provides important opportunities for local communities while keeping the carbon stored in its precious peatlands.

The move followed commitments by authorities in neighbouring Belarus to expand protections of the Almany Mires Nature Reserve in March 2021. Almany was expanded by 10,000 hectares, bringing the size of the reserve up to 104,000 hectares – roughly the size of Hong Kong. Research carried out as part of the Polesia – Wilderness Without Borders project, supported by the Endangered Landscapes Programme and Arcadia – a charitable fund of Lisbet Rausing and Peter Baldwin – helped to identify crucial habitats for rare wildlife in need of protection. 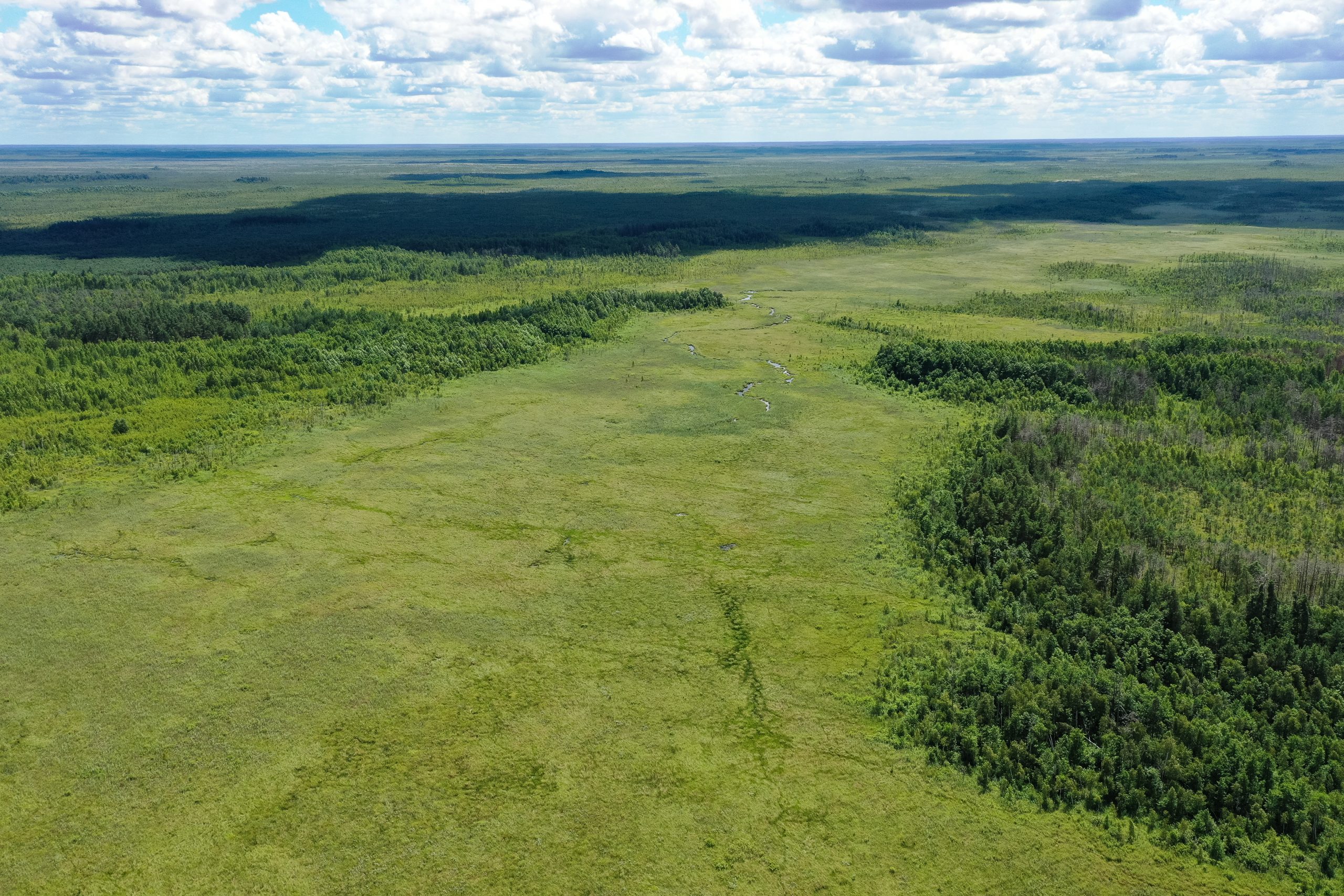 Together with the newly protected areas across the border in Ukraine, the area – which sits at the heart of Polesia – forms one of the largest peatland complexes in Europe.

“A lot of work has been carried out by researchers and conservationists to characterise the flora and fauna in the region and ensure that this very special environment is protected from the threat of developments and construction. There are also crucial initiatives underway to restore parts of the ecosystem that have been damaged by human activities.”

Peatlands are the most carbon-dense terrestrial ecosystems. Globally, the carbon stored in them exceeds carbon stored in all other vegetation combined, including forests. Maintaining them is essential to help tackle the climate crisis. They also provide sanctuary for wildlife, spanning grey cranes, black grouse, beavers, otters, moose, bats, insects, and migratory birds.

Dianna Kopansky, who leads the Global Peatlands Initiative at UNEP, said “With most of Europe’s peatlands drained and degraded, this great wilderness is an oasis – for wildlife, people, and for our climate future.  The work to expand protections and raise Polesia’s conservation status represents the action on the ground needed to fight the triple crisis we are facing and is a great contribution to the UN Decade on Ecosystem Restoration. The conservation and sustainable management of this critical trans-boundary landscape could not be more important for the people of the region.” 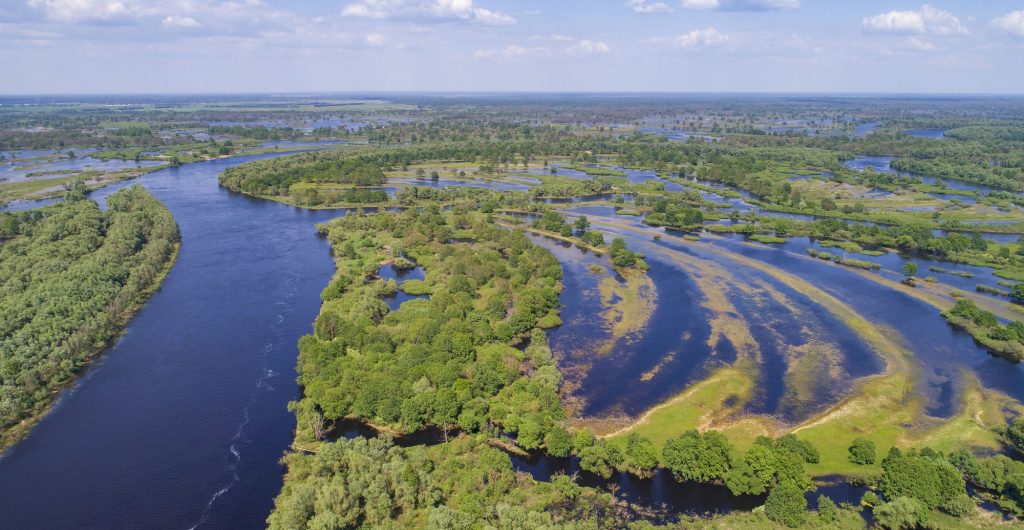 An aerial photo of the River Pripyat and its surrounding floodplain meadows, wetlands and oxbow lakes. This is an extremely important site for migrating birds (mainly waders) who stop here to feed on the abundance of food before continuing their migration. Turov area, Polesie, Belarus. Photo: Daniel Rosengren

Historically, habitats such as peatlands have often been regarded as wastelands. As people don’t live on them, they can come under pressure from those wanting to turn them into farmlands or build roads across them. Many peatlands around the world are now severely degraded.

When peatlands are drained, the organic matter stored in them decays, releasing carbon dioxide into the atmosphere in the process. The dried land also becomes more susceptible to fires. The drainage of bogs and mires undermines the wider ecosystem health, its water flows, and the vital contributions they make to fresh and drinking water supplies.

The first priority to protect these crucial habitats is to leave them as they are. That is why conservationists are campaigning to have these and other vital habitats across Polesia recognised with protected status at both the national and international levels.

Another priority is to restore those areas that have been degraded or damaged. Peatlands typically form very slowly, over hundreds or thousands of years. But rewetting or revegetating damaged peatlands can revitalise their carbon storing abilities and reinvigorate their habitats for native plants and animals.

Although significant areas are already under formal protection, conservationists are calling for the central part of Polesia to be recognised internationally on the UNESCO World Heritage List to ensure adequate protection of the region’s vulnerable species and wild landscapes, and recognition of its incredible natural beauty.