During challenging times, restoration efforts are successfully continuing in the Danube Delta. During this year’s breeding season, over 22 young of various species were born within the project area in Ukraine. This includes the first kulan to be born in Europe for over 200 years. The Rewilding Ukraine team is delighted with the success of this year’s breeding season, despite the hardships of drought and war.

In each area that the team was able to survey this year, the animals that have returned to the region thanks to restoration efforts of the past three years are having babies. Among these, eight foals were born to koniks (wild horses) which were introduced to Ermakiv Island from Latvian reserves. Two months ago, a buffalo was also born on Ermakiv.

On the steppe, the herd of water buffalo which has been present in the area since 2021 has produced four young. In addition, a foal was born in the herd of kulans which were released from the acclimatisation enclosure into the wild landscape of the Tarutino steppe. This is the first kulan to born in the European continent during the last few hundred years.

This year’s record for the number of babies from one mother is held by a steppe marmot who gave birth to six pups in the spring. This family of steppe marmots settled in the Tarutino steppe two years ago, and were one of the first species to benefit from restoration activities in the area. Although the steppe has natural predators such as the fox and birds of prey, all of the young survived and have grown to adult size. In the future, further releases of marmots into the steppe are planned to create a viable population of the species there. 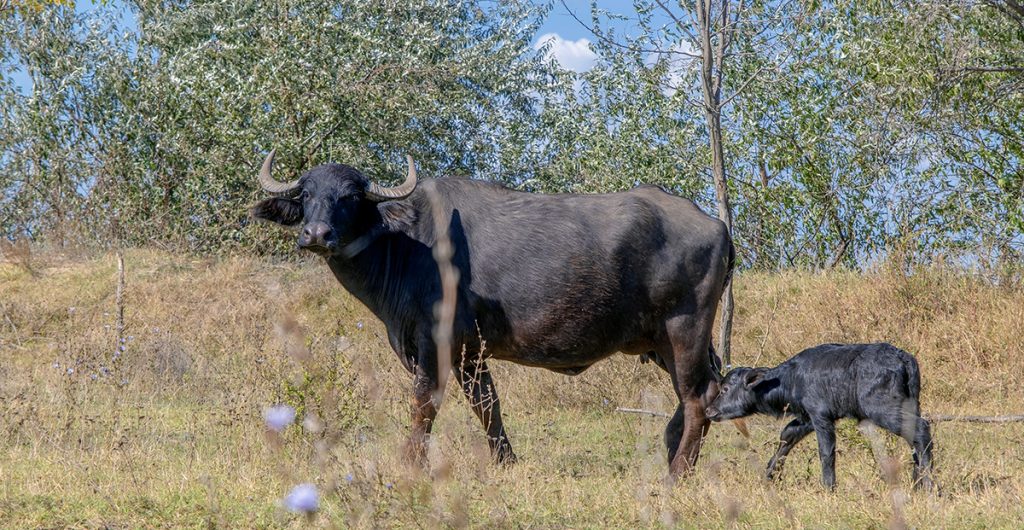 Producing young is a sign that animals feel settled in their environment and are thriving in the region. Photo: Andrey Nekrasov.

“Over the last century, many natural areas of the region were destroyed, the land was used for agriculture. We restore floodplains and steppes, forests and lakes, returning them to their natural state. But our landscapes are like beautiful theatres without actors – large animals that once lived in the region. Ecosystems are incomplete without them, because animals perform important functions. Together with local partners, we have already been able to return many animals to the delta, such as wild horses, water buffaloes, kulans, marmots and others. And we are very happy when we see their babies. This means that they feel good in the region and can establish themselves here and reach a sufficient number to have a positive impact on natural systems, for example, to restore the process of natural grazing.” – Mykhailo Nesterenko, executive director of Rewilding Ukraine 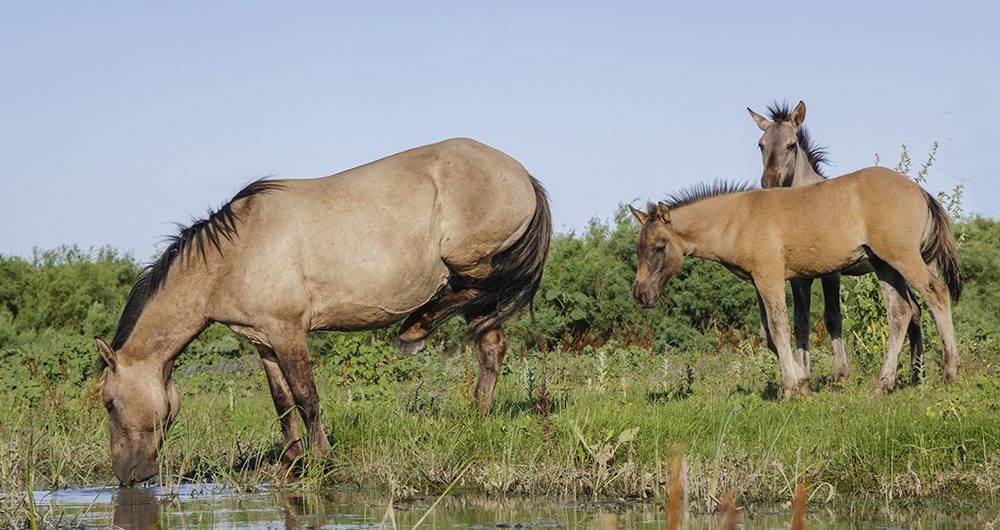 Large herbivores like the koniks contribute to a healthy ecosystem through activities like grazing and seed dispersal. Photo: Andrey Nekrasov.

Support of natural grazing through the reintroduction of wild species of large herbivores is one of the tools that can be used to restore natural areas. Through their grazing, seed dispersal, and trampling activities, large herbivores such as koniks support natural meadows. The diversity of landscapes created in this way attracts many species of insects, amphibians, birds and other animals and increase the species richness of flora.

“Recently, we finally managed to visit some remote areas of the Danube Biosphere Reserve, which have not been accessible since the beginning of the war. We did not know what was happening there and whether the animals were ok. We were especially worried about the wild horses that two years ago settled on the island in the Danube Delta as part of rewilding efforts. But when we reached these areas, a group of koniks came out to meet us. They look healthy and well fed and moreover have three foals. Unfortunately, we did not see other groups of koniks. But we hope that they are also doing well,” – Oleksandr Voloshkevich, director of the Danube Biosphere Reserve 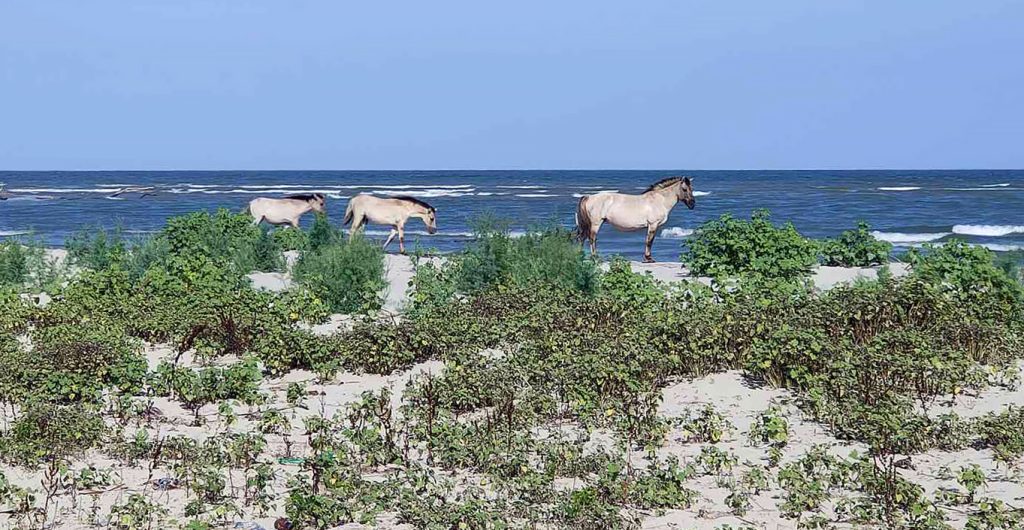 Konik horses and their foals have been spotted in remote areas of the Danube Biosphere Reserve, appearing healthy and well-fed.

“We monitor the animals in the areas that we can visit now. All babies are feeling well, growing and getting stronger. Of course, we worry about them, and not only because we have put a lot of effort into their return to the region. I always watch animals with delight, and care about them. Nature and man are inseparable and only together can we look to the future with hope. I hope that after the victory, we will be able to restore not only the cities, but also the nature of our country,” – Oleksiy Pudovkin, animal reintroduction specialist at Rewilding Ukraine 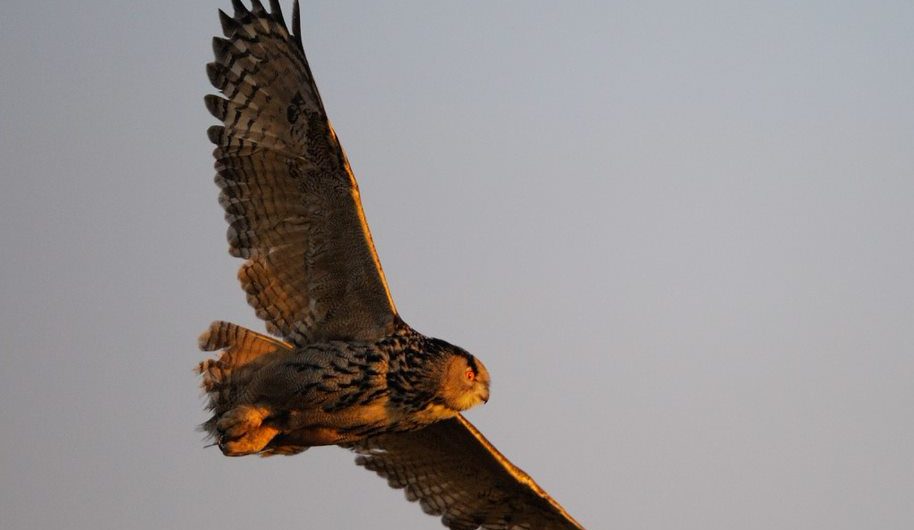 Only one eagle owl released by the project team is still able to be tracked. Photo: Staffan Widstrand.

Unfortunately, access is restricted to many areas of the Danube Delta due to the war. Therefore, the fates of some animals that were released in the region are not yet known. To date, there is no information about the herd of Hutsul horses on Tataru Island. Moreover, all but one of the owls that settled in the outer delta over the last three years as part of a reintroduction programme cannot be traced.

This article was originally posted on the Rewilding Danube Delta website. To find out more about the Danube Delta Restoration Landscape, visit the project page.