Foundation Conservation Carpathia (FCC), a beneficiary of an ELP Implementation Project Grant, are working to create a new wilderness reserve in the Southern Carpathian Mountains in Romania. However, in light of the current coronavirus pandemic, FCC are directing their efforts to help elderly people in ten communities of their project area in the South-Eastern Făgăraș Mountains – beginning with the purchase and distribution of 500 packages of food and hygiene products.

Projects working on the environment at landscape-scale need a whole range of assets to deliver their vision. This includes fixed, tangible goods such as vehicles, tools and other equipment, but also vital skills to manage complex logistics, build relationships with local communities, and develop connections to politicians, local government and local businesses. FCC are using such assets to support those most in need in their project area during the COVID-19 crisis.

With the government lockdown and the consequent hardships for local people – especially those over 65 years, on low income or those who don’t have relatives in their village – the situation in many rural areas is severe. While the media focuses on the cities and their hospitals, the situation in the countryside is equally worrying.

In response, FCC set up a project team and developed a “Food for Elders Programme”. As Daniel Bucur, Project Manager at FCC, puts it: “Our actions do not end with restoring habitat and protecting wildlife. It is just as important for us to show that people are the focus of our vision in the long-term. Therefore, helping the local population, especially the elders, comes from our core values, and not as a ‘checkbox’ exercise.”

Given the ban on buying large quantities for stockpiling, and the project’s philosophy on supporting local, small-scale producers, the project took an approach that grew out of their local knowledge and connections. For example: 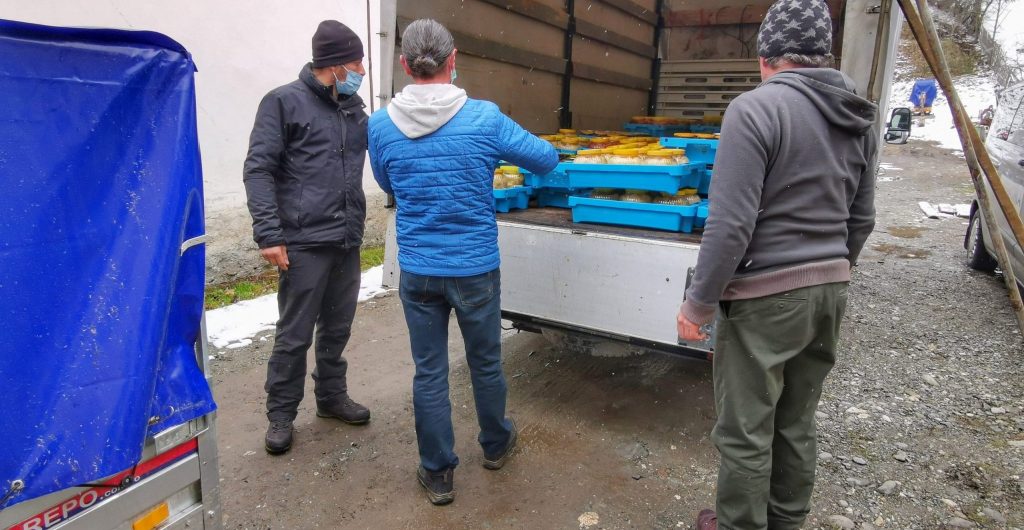 For those living in more rural areas, many of whom are elderly, isolation from relatives creates further challenges in the face of coroanvirus. Photo credit: (c) Conservation Carpathia / Georgiana Catan.

Christoph Promberger, Co-founder and Director of FCC tells us: “In the current context, we believe it is necessary to buy from small local producers and ensure that money is being invested in the local economy. This helps support jobs and create sources of income for small farmers during these difficult periods. This is our first step towards developing a system that will help positively capitalise on traditional local agriculture in the medium and long term.”

FCC staff have worked tirelessly to organise all of this – to assemble the food bags and to deliver the first 500 packages to people in need in ten communities of their project area. Further distribution of these packages will be carried out regularly during the next four weeks for these 500 people in the South-Eastern Făgăraș Mountains and Leaota, for as long as the emergency situation lasts.

If you would like to contribute and help to increase the number of people being supported in the area or to support the possible extension of the support period, you can donate directly to the FCC project.