Another season of fieldwork is coming to a close for the Carpathian Mountains project in Romania, and with it another phase of the DNA monitoring to study wolf (Canis lupus) populations in the Făgăraș Mountains project site. This long-term monitoring project has been implemented by specialists since 2017, with data added every year since, providing an example of how scientific data and evidence can inform wildlife management.

Bringing back the wolf

The wolf is an important apex predator in this landscape, ecologically and culturally. This elusive creature features in ancient legends such as the story of the she-wolf that fed Romulus and Remus, and has a critical role in the ecology of the landscapes they are part of. Once extant across Europe, wolves were persecuted throughout much of the continent in the 19th and 20th centuries, almost to the point of extinction. As a keystone species, their absence had a dramatic effect on the ecology of those areas; deer multiplied and an imbalance was created by overgrazing of forest vegetation. Even diverted river courses are the result of wolves disappearing.

Thanks to conservation efforts there are now around 12,000 wolves in Europe, with perhaps the best-known example of wolf population recovery (and their subsequent positive impact on their ecosystem) is in the United State’s Yellowstone National Park. Despite the positive trend in Europe, Foundation Conservation Carpathia (FCC), who lead the ELP-funded Carpathian Mountains project, are pragmatic about the challenges of human-wildlife coexistence and have created a model that is centred around a model of prevention, intervention and compensation, so that potential conflicts with apex predators can be managed effectively.

Prevention: To help prevent human-wildlife conflicts to begin with, the project breeds and donates Carpathian shepherd puppies (46 to date) to protect shepherd livestock, and install electric fences to reinforce night-time security in the households or farms. The 40 electric fences are provided free of charge to local communities.

Compensation: On the occasions that prevention and intervention haven’t succeeded and livestock have been killed by large carnivores, the project uses their innovative compensatory measure of voluntarily donating replacement animals. To date FCC have donated 38 sheep and nine cows in exchange for those lost to wild predators. 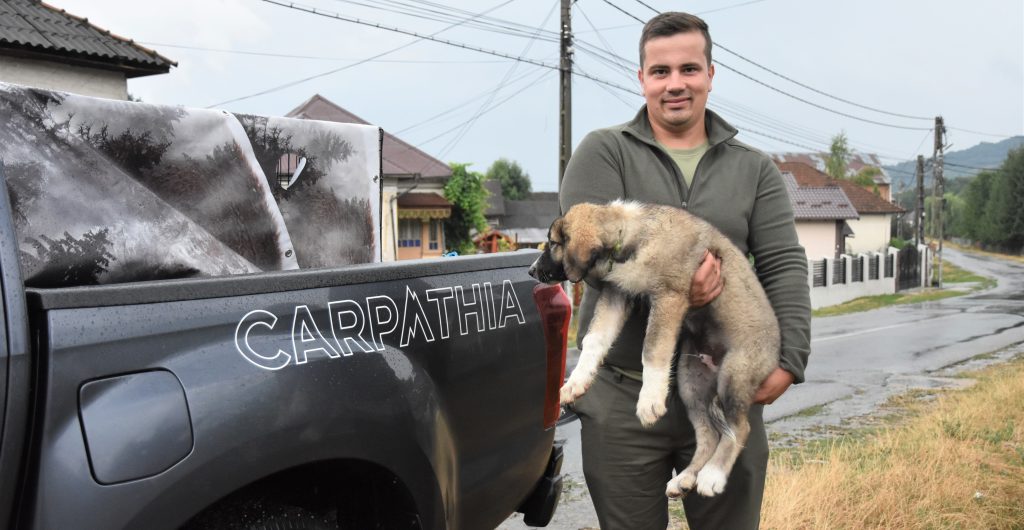 Carpathian Shepherd dogs (apart from being very handsome animals!) are bred to be people friendly and protective of livestock. So far the project has donated over 40 dogs to shepherds and farmers in communities within the project area. Photo: Calin Serban.

Habitat fragmentation and loss, changes in land use, and urban development continue to threaten wildlife numbers, not just wolves. The prevention – intervention – compensation model contributes to better coexistence between villagers and wildlife, but a priority for the project team is that it is based on a foundation of scientific data on the size of large carnivore populations, the extent of the conflict, and potential triggers. For responsible management of large carnivores in the Carpathians, a modern and scientific scheme for monitoring their populations is necessary.

“An important aspect of our work is to determine as accurately as possible the density of large carnivore populations and the most important carnivore food source species,” says Barbara Promberger, wildlife biologist and Executive Director of FCC. “We have developed a monitoring programme based on scientific research on lynx, bear and wolf species, and have recently tested the method on deer, over an area large enough for the ecology of these species – 120,000 hectares. We make wildlife management decisions on much of this area based on the data we obtain. With public and private funding our team has been working since 2017 in the eastern Făgăraș Mountains on a wolf monitoring programme to estimate population size and density, track pack dynamics over time and assess population trends in the context of changes taking place, especially within the species’ habitat. We do not want to capture wolves to study them with collars, for example. That’s why we work non-invasively, taking DNA samples from wolf scat, urine on snow and hairs, which we analyse in Slovenia at one of the best laboratories in Europe.” 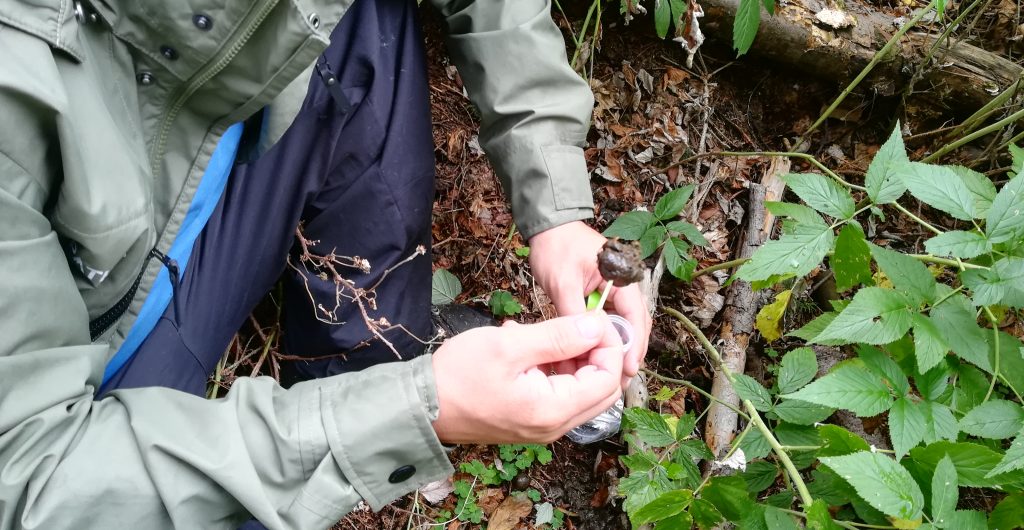 Scientists in the FCC team have been monitoring wolf populations since 2017 using scat, urine and hair samples, and will be publishing the results of their study in early 2023. Photo: Claudiu Toanta.

A lack of snow in recent years has created a challenge for the project because it has been difficult to find wolf tracks, which has reduced the chances of finding scat, urine and hair for DNA analysis. The team have persevered, however, and found useful results so far.

“Of the total number of 505 samples analysed so far, 53% confirmed the genetic fingerprint of the wolf species, the rest had insufficient DNA or were contaminated with other species,” explains Ruben Iosif, Biology Coordinator of the FCC wildlife monitoring team. “This shows that the wolf is not an easy species to study. By comparison, we have a greater success in bear (65%) and deer (75%) samples. Analysing the genetic parental relationships between wolves in the project area, we grouped them into six packs ranging in size from three to seven wolves per pack, but with quite a large dynamic within families from winter to winter. Our estimated density is somewhere around 2.35 wolves/10,000 hectares, significantly higher than in northern European countries, but also twice the density found in Yellowstone Park in the USA,” continues Ruben.

The team will continue collecting samples from December 2021 – May 2022, the final wolf DNA field work season before publishing the final results of the study in early 2023.

A version of this article first appeared on Foundation Conservation Carpathia’s website. If you would like to find out more about this project, please visit the Carpathian Mountains project page.