The scenic shores of the Azov-Black Sea coastal area – an internationally important wildlife corridor – stretch for 800km from the Danube Delta to Taganrog Bay in Ukraine. Despite significant human pressures since the 1970s, this region is still rich in biodiversity, providing a home to more than 10,000 species of flora and fauna, including IUCN red-listed species such as sturgeons. It is also a crucial stopover site for birds migrating from Eurasia to Africa and the Middle East. 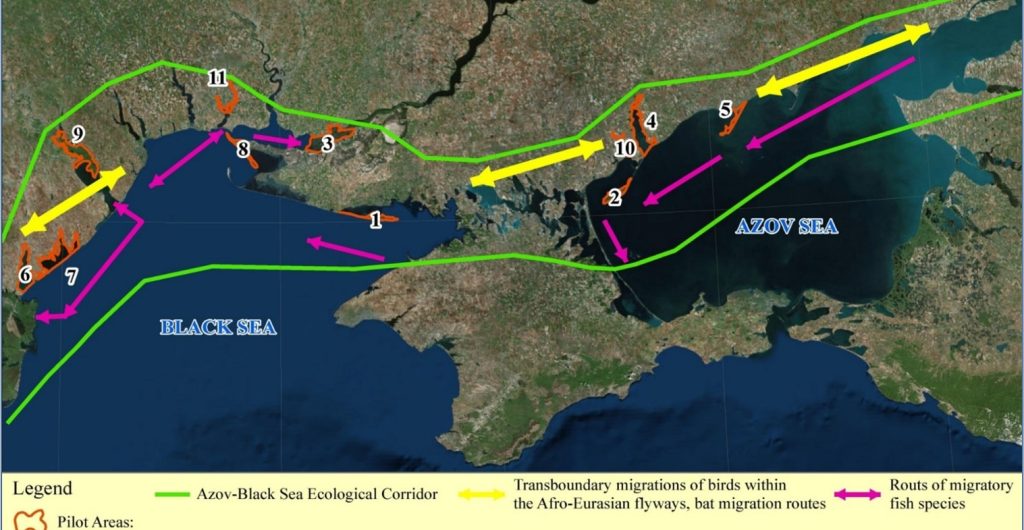 Since 2019, the Endangered Landscapes Programme has funded a Planning Project in this area, by the Ukrainian NGO Centre for Regional Studies (CRS). The project aims to explore the restoration potential of the eco-corridor and lay the groundwork for further large-scale restoration of the coastal, estuarine, delta and steppe systems within it.

To better understand the underlying issues which threaten the project area and select the most suitable sites for restoration work, experts – including project partners Rewilding Ukraine, Rewilding Europe, WWF Ukraine and the Azov-Black Sea Ornithology Station – were invited to visit earlier this autumn. The ELP team were particularly encouraged to see this collaboration take place as Rewilding Europe and Rewilding Ukraine lead another project funded by the ELP – a large-scale Implementation Project in the Danube Delta.

Igor Studennikov, CRS Director and manager of the Azov-Black Sea project, was grateful to have the opportunity for sharing knowledge and expertise during the two expeditions that took place: “We were excited to invite this great mix of experts and key stakeholders to the project area, and give them the opportunity to see its potential for restoration first hand”. 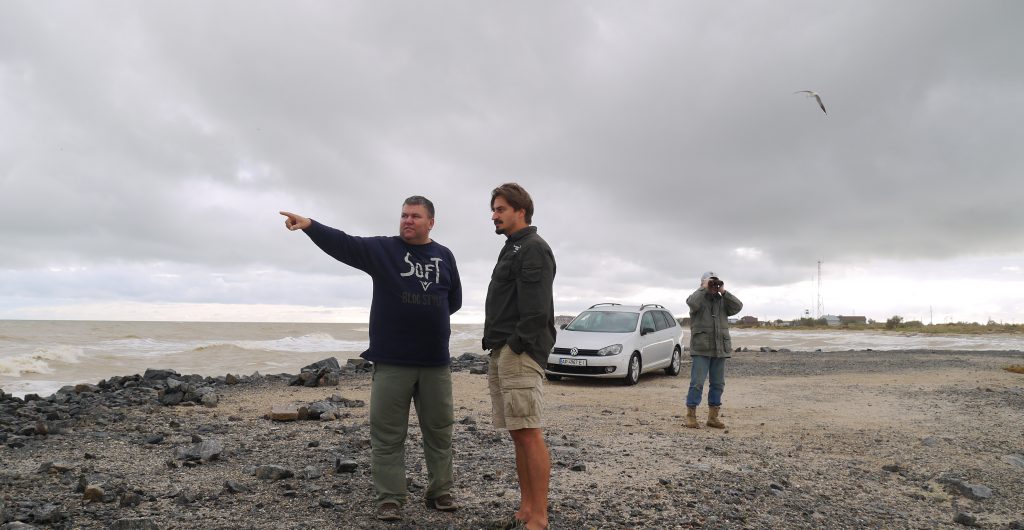 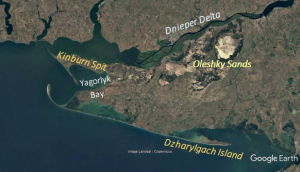 The starting point for the first expedition was Kinburn Spit, a protected area within Ukraine’s Sviatoslav White Coast National Park. Kinburn Spit is washed by waters of the Black Sea, the Yagorlyk Bay and the Dnieper-Bug Liman Estuary, resulting in a myriad of landscapes, from sandy beaches to relic forest, to steppe and salt marches, to sand dunes and reed beds. The diverse mosaic of habitats here potentially means a suitable location for the reintroduction of large herbivores, which adapt well to marshy habitat. Indeed, a small herd of feral horses already inhabit this area.

Kinburn Spit has high biodiversity value, and is home to many endemic and endangered species, but over the last decade has faced increasing human pressure on its ecosystems due to the rapid growth of beach tourism and off-road racing, which continue so far unrestricted. A subsequent increase in littering and plastic pollution has put pressure elsewhere in the project area, including on Dzharylgach Bay and Island – an important stopover site for the vulnerable red-breasted goose. Thankfully, for most of the year the island is not visited, meaning it can continue to play an important role in ensuring the continuity of the Azov-Black Sea eco-corridor.

The last stop for the expedition was the Lower Dniester National Park, a mosaic of floodplains and waterways which provide refuge for nesting and wintering waterfowl, and is also home to wild boar, roe deer, fallow deer and red deer. A key issue here is the disruption of river connectivity due to a cascade of hydropower stations upstream, the last of which is the Kakhovka Hydropower Station that currently does not play an important role in electricity generation and is structurally weak. The project is hopeful that there will be an opportunity to take measures to restore hydrology further downstream, and perhaps to explore a chance of dam removal in future. 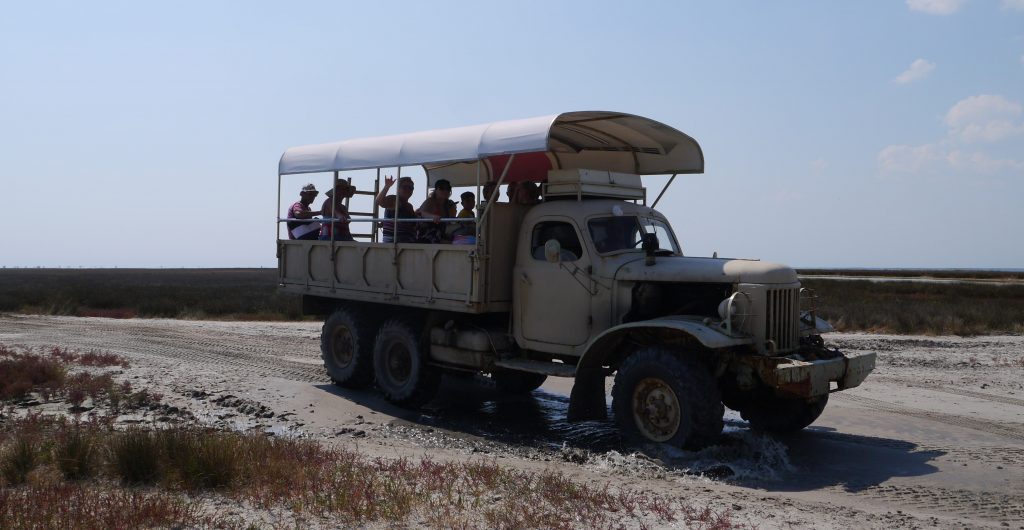 Unorganised tourism and a steep rise in visitors to ecologically sensitive areas is a concern for the project. Photo: Igor Stedennikov.

The second expedition: stepping back from habitat management

The second expedition started from the mouth of the Berda River, on Ukraine’s southeast coast. Together with Berdiansk Spit and Berdianska Bay, this area is an internationally important Ramsar Site. The area currently requires some human intervention in the form of reedbed management, to maintain a mosaic of ecosystems for wildlife, but in the future this role could potentially be given to herbivores such as water buffalo to let nature take care of itself.

Elsewhere the population of wild herbivores is too high. Kulan (wild ass) are overgrazing parts of the project area. Several projects in Europe are looking at the potential of reintroducing kulan for their ecological importance and there could be an opportunity to move individuals from areas of high grazing pressure. 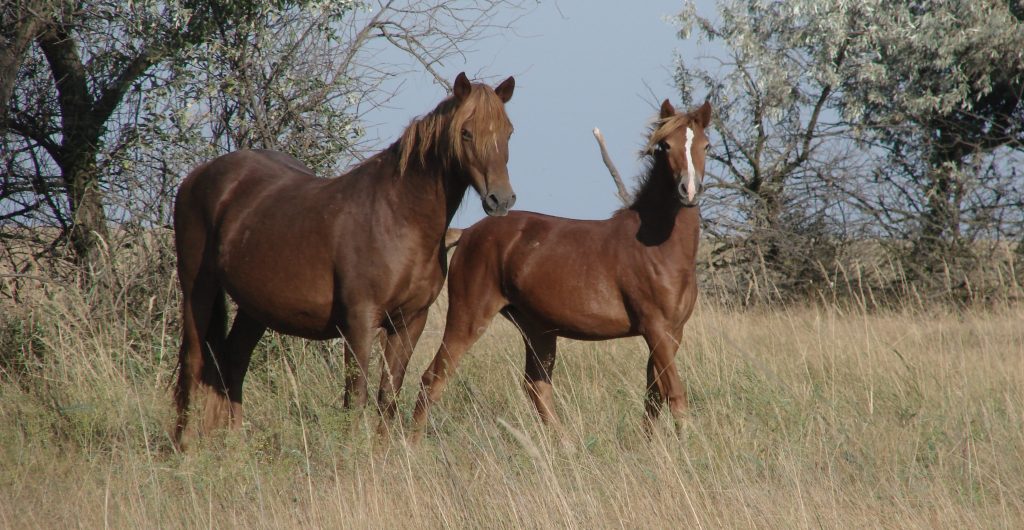 As with most ELP-funded Planning Projects, bringing stakeholders together to strengthen partnerships and share knowledge is a critical part of building the foundations for large-scale implementation. The expeditions included not only project partners and NGOs, but also local reserve managers, forestry and water management bodies, members of the local community and even hunting societies.

For Igor, this is a vital step for the project: “It is crucial to establish good cooperation between key stakeholders in the region, so that we are able to implement sound ecological restoration measures and restore connectivity along the Azov-Black Sea eco-corridor. Some of our stakeholders may not be ‘typical’ partners in restoration, such as hunting associations, but it is still possible to include them in the conversation when we talk about population sustainability”.

Including wider participation in the project also allows issues of poaching and a lack of public engagement in wildlife protection to be addressed. The project has aspirations to encourage local economic growth with nature-based business models, but recognise this will require wider public education about the environment and the economic opportunities of healthy ecosystems, as well as the political will of regional governments to support environmental protection.

To find out more about this project, visit the Azov-Black Sea project page.