After more than 200 years since their disappearance from the central forests of Romania, eight bison were released into the Făgăraș Mountains earlier this summer. These bison were the first individuals to be released as part of a wider bison reintroduction programme, a key objective of the ELP-funded Southern Carpathian Mountain project led by Foundation Conservation Carpathia. 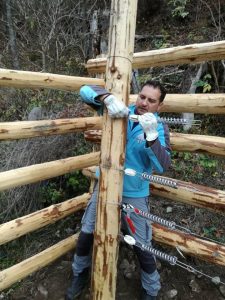 Once spread across the continent, European bison were almost hunted to extinction in the early 20th century. One of Europe’s most encouraging wildlife stories, however, is their recovery.  Thanks to captive breeding in zoos and reintroduction efforts since the 1950s, popluations have increased – although bison are still listed as ‘vulnerable’ on the IUCN Red List. The Białowieża forest in Belarus and Poland is currently home to Europe’s largest free-roaming herd of bison, and the focus of another project funded by the ELP.

By reintroducing bison back into the Făgăraș Mountains, a missing link has been re-established in the area’s ecosystem. Bison are considered by many to be a ‘keystone species’, meaning that they have a disproportionately positive effect on other species in the ecosystems they are part of. As bison forage, for example, they help to disperse seeds and aerate soil with their hooves, aiding native plant growth. Meadows are maintained by grazing bison and forests acquire a better natural structure when bison are present, which in benefits species such as deer.

Although the bison have only recently been released into the wild, they were first brought to the Făgăraș Mountains in autumn 2019 from a reservation in Germany and the Carpathian Mountains in Poland. For the first few months, the bison were closely monitored in a special quarantine enclosure (see photo, right. Photo: Adrian Aldea). Project staff could analyse the progress of the bison and carry out treatments in line with Romanian legislation. After this quarantine period, the bison were released into a larger enclosure, where they had the opportunity to adapt to their environment and acclimatise to variable temperatures, vegetation availability and predators.

Watch the bison in their new home in the clip below (credit: Foundation Conservation Carpathia):

Making people part of the process

A sociological study was conducted in the Făgăraș area during 2019 by Canadian researchers, and found that most respondents in the area were positive about the reintroduction of the bison. Residents expressed an awareness of the importance of this species for nature and tourism development in the area, and were confident that future generations would be supportive of their presence in Romania’s forests.

Now that the bison have been released, FCC will carry out measures to monitor their adaptability, as well as prevent any unexpected encounters with people from neighbouring communities. Local inhabitants have been encouraged to contact a local FCC representative to provide any information about bison activity, thus involving communities in the comeback of this magnificent species.

Feasibility studies suggest that 100 bison will be needed to ensure the success of reintroducing this vulnerable species. The project’s wider bison reintroduction programme will be carried out in three areas, and eventually aim for a minimum of 30 individuals in each area. The bison will be able to move and migrate between these areas, facilitating the overlap of individuals from the three groups and increasing genetic diversity of the overall population. To achieve this, the project aims to initially have at least ten bison in each area, and add five individuals each year until they reach their target of 30 bison in each area.

With the first eight bison now released, FCC have been preparing for the next stage of the programme – introducing bison into the second area in Lerești, Argeș County, and a third area in the Făgăraș Mountains. These releases are planned for later in 2020.

The project is grateful that this complex process has been supported also by local authorities in Rucăr and Lerești, regional authorities, the Argeș Environmental Protection Agency and the Argeș Veterinary Sanitary and Food Safety Directorate, as well as managers of neighbouring hunting areas. 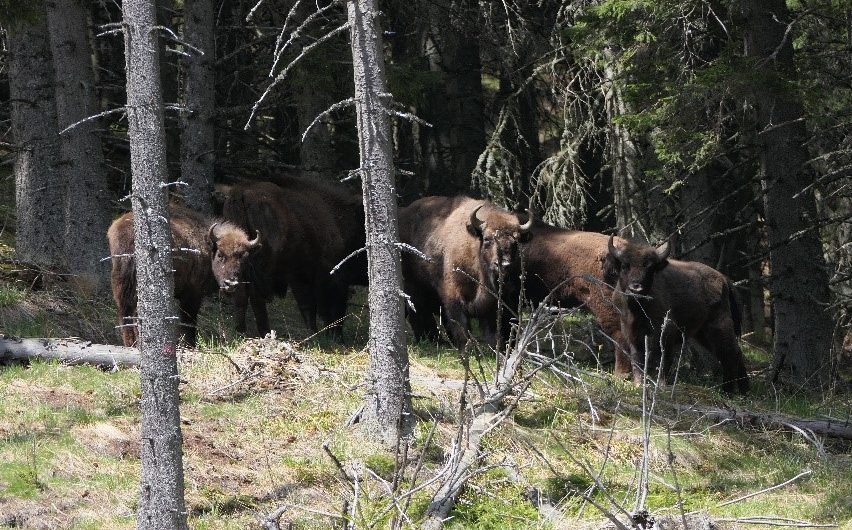 The herd of eight bison are the first to be released as part of a wider bison reintroduction programme. Photo: Foundation Conservation Carpathia.

Celebrating bison as a national symbol

Strong and majestic, bison have been an intrinsic part Romania’s national history and folklore for hundreds of years, and remain a national symbol of Romania today. Pragmatically, bison have great economic potential through the role they play in the development of local wildlife tourism. For FCC, the reintroduction of bison is not only an example of reversing biodiversity loss, but is also an excellent example of how nature conservation can help local communities thrive and develop.

As such, the project aims to support the development of tourism in the area by building a series of visitor centres in the future for tourists – especially those from the Făgăraș Mountains – to learn more about the history of bison and its place in this landscape.

To find out more about this project, please visit the Carpathian Mountain project page.

A version of this article first appeared on Foundation Conservation Carpathia (FCC)’s website.