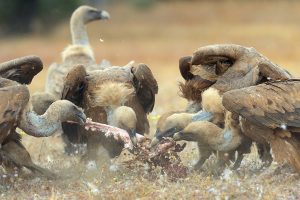 Griffon vulture, Gyps fulvus, SPAIN/CAMPANARIOS DE AZÁBA RESERVE, SALAMANCA PROVINCE, CASTILLA Y LEÓNV ulture watching has become increasingly popular and can now be done at several sites in Spain and Portugal, where you can see these amazing birds up close from purpose-built hides. This photo is from a hide in the Campanarios de Azába reserve, run by Fundación Naturaleza y Hombre and a part of the Rewilding Europe initiative. For the first time in European history, live, wild vultures can be worth serious money for the land owners.The comeback of the griffon vulture in Spain is a great conservation success story – from 7,000 pairs in 1980 to approx. 18,000 in 2009. Griffons now breed in 16 European countries and have recently been seen in Belgium, Germany and the Netherlands. But it’s not all good news. Each year, around 1,000 vultures are killed in Spain as a result of collisions with poorly placed wind turbines. EU veterinary regulations also mean that fewer dead domestic animals are left out in the open, and this has spelled disaster for all four European vulture species. Particularly in Greece and the Balkans, vultures still also fall victim to some shepherds bad old habit of poisoning carcasses to kill wolves – inevitably, all other scavengers then die off too. Photo: Staffan Widstrand/Wild Wonders of Europe