Insect indicators: What can they tell us about Polesia’s wetlands?

Polesia is among the largest of natural wetland landscape in Europe. The biodiversity and stability of its ecosystems, however, suffer from the draining of mires (a type of peatland). Drainage channels that were dug for the so-called “reclamation” of land for agriculture during Soviet times continue to drain large parts of Polesia’s wetlands. Drained mires make the area less resilient to droughts and fires, whilst also eliminating important ecological processes and habitat. To address this, part of the ELP-funded Polesia project is the restoration of 6,000 hectares of drained mires in the core area of Polesia.

This also raises the question of how we know where restoration is needed, as well as understanding if interventions have the desired effect. To answer this, as well as ensure that project activities benefit all aspects of the ecosystem, sound ecological knowledge is needed. More specifically, the project team need data on insects. Insects are excellent indicators of ecosystem health as they are very sensitive to environmental change and respond quickly to disturbances or restoration, due to their short lifecycles. Therefore, certain groupings of insects can be associated with certain habitats – or indicate different states of ecosystem health.

Insects are also at the heart of food webs that sustain ecosystems, providing sustenance for birds, bats and small land mammals. The Polesia project team are looking at numbers and composition of insects to better understand the importance of undisturbed habitats, the impact of drainage, wildfires and seasonal changes, and the effect of their restoration activities on mire ecosystems. 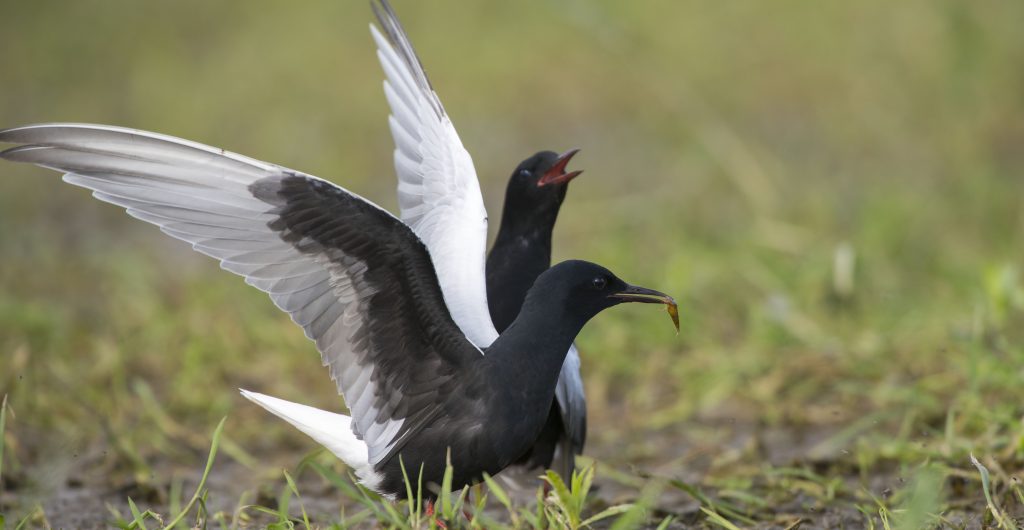 In May, the project’s field team started installing malaise traps (tent-like structures) to sample flying insects. The traps are being installed in near-pristine mires, drained mires (ranging from heavily drained to slightly drained), restoration sites and sites affected by fire. They expect to catch mostly Hymenoptera (bees and wasps), Diptera (flies and relatives), Lepidoptera (moths and butterflies), as well as some Odonata (dragonflies and damselflies), Ephemeroptera (mayflies) and small Coleoptera (beetles).

The ecologists recently started collecting the first samples that had been caught by the traps, which raised a tricky challenge: species identification. Having specialist taxonomists identify each individual insect would be very time consuming. Moreover, many insects (especially flies) have not yet been classified to species level. Therefore identifying large numbers of samples across broad taxonomic groups is very difficult, if not impossible.

The team are largely resolving this problem by using a technique called ‘DNA metabarcoding’, which allows simultaneous identification of many taxa within the same sample. DNA will be extracted from insect samples, sequenced to reveal its genetic code and identified by comparing against freely available genetic libraries. Even species not listed in genetic libraries can still be differentiated from one another genetically and can be labelled as “Species A” or “Species B”, and their presence compared across samples and sites. The overall weight of each sample (biomass) will also be measured to compare the abundance of insects present between sites. 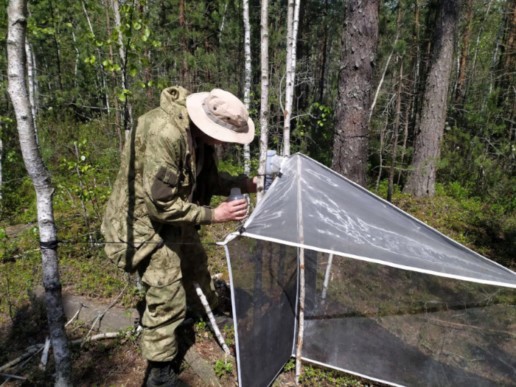 The malaise traps were set up in May, and recently checked to collect first insect samples. Photo credit: © Alexey Semeniak.

This sampling technique will continue over the next four years. Over this period, the project will be able to analyse the response of insects to changes from restoration activities, while accounting for weather conditions between seasons and years. For example, it may be that in years of favourable weather conditions – with cold winters and large spring floods – insect communities do not differ much between natural and drained sites. In years of drought and environmental stress, however, insect communities might be more impacted in sites that are degraded and lack the environmental buffers provided by a ‘healthier’ or restored ecosystem.

Besides monitoring the effect of restoration, this study will help predict the consequences for biodiversity if draining is not stopped. The team may observe losing certain types of insects and, consequently, associated plants and larger animals that depend on them for food and pollination. After the next four years of careful monitoring, the team is likely to know the answer to this question. In the meantime, the project team will start blocking drainage channels to rewet mires, and use their ongoing findings to adapt their activities – thus supporting the their ambition to increase resilience of this important natural landscape.

The Polesia project is led by the Frankfurt Zoological Society, in partnership with local Belarusian and Ukrainian partners, with the British Trust for Ornithology (BTO) leading on their science and monitoring programme. A version of this article first appeared on the Wild Polesia website, written by Adham Ashton-Butt and Corinna Van Cayzeele.