It is fair to say that vultures have historically been dealt a tough hand in the media. Yet despite being presented as menacing characters in most films and books, looming overhead as a premonition of death, these scavenging birds of prey are grossly misunderstood. In reality vultures play a vital role in the natural functioning of the food webs and ecosystems they are part of. Today, on International Vulture Awareness Day, we showcase some of the work funded by the Endangered Landscapes Programme that is helping us to better understand and support these majestic birds.

The role of vultures in the ‘circle of life’

Vultures feed exclusively on carrion (dead animals), using their powerful beaks and strong stomach acid to digest their food. Their efficient disposal of carcasses limits the chance of other wildlife (and in some cases, humans) being infected by deadly bacteria. Indeed, one of the most pertinent examples of the ‘service’ that vultures provide is the Indian vulture crisis, in which widespread use of a livestock veterinary drug led to a rapid decline in vulture populations in rural India. Without vultures around to take care of decomposing bodies, feral dog populations increased, and the country faced a rising epidemic of rabies outbreaks. 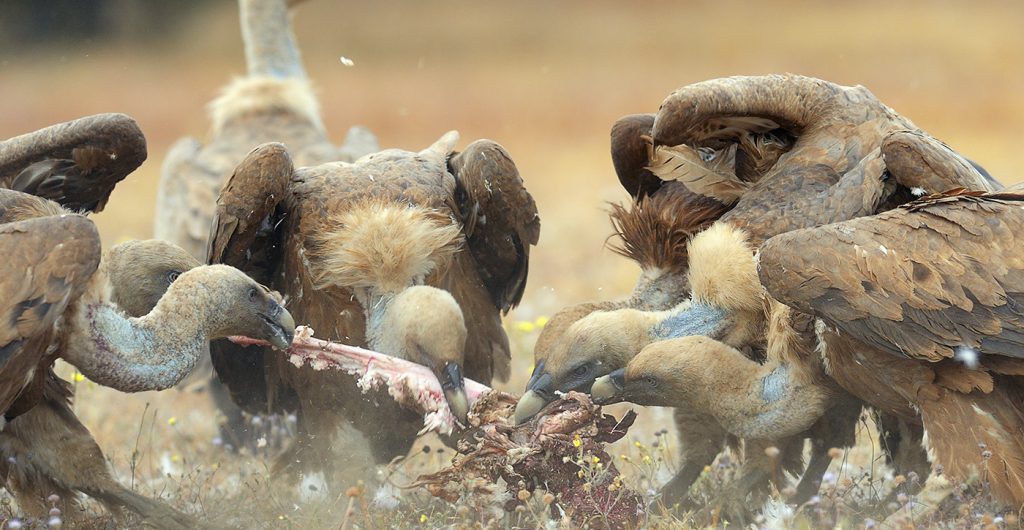 Vultures play a key role the disposal of carrion as part of complex food webs and the so-called ‘circle of life’. Photo credit: Staffan Widstrand / Wild Wonder of Europe.

Closer to home, there are four vulture species that reside in Europe; griffon, cinereous (black), Egyptian and bearded. There is nothing quite like the sight of these majestic birds flying overhead, or seeing a group (fittingly known as a ‘wake’) gorge on a carcass. Only two centuries ago, vultures would have been a common sight throughout central and southern Europe. However, a decline in the availability of food, compounded by habitat loss, persecution and poisoning led to a dramatic drop in vulture populations – even disappearance, in some cases – from many European countries. Great efforts have been made, and continue, to reintroduce and protect vultures in Europe, which have allowed for a steady recovery over the last 10-15 years.

Below are three case studies to show how ELP funding is enabling vulture recovery in Europe.

Northern Portugal’s Greater Côa Valley, connecting the Malcata Mountain range in the south with the larger Douro Valley in the north, is an important eco-corridor for many species including vultures. The Egyptian and black vulture are particularly reliant on this habitat, nesting on the rocky cliffs that border the Côa River. Led by Rewilding Europe and Rewilding Portugal, a scaled-up project in the Greater Côa Valley is using ELP funding to restore tracts of land and connect the valley with existing protected areas – eventually creating a 120,000 ha wildlife corridor.

Despite signs of recovery in the area, a major challenge for the project is understanding how to support vultures in the long-term. In 2001, the European Union (EU) prohibited farmers from abandoning livestock carcasses, in response to the crisis caused by bovine spongiform encephalopathy (BSE or ‘mad cow disease’). This had a huge impact on vulture populations, which relied on these carcasses in the absence of wild herbivores. EU countries have since been allowed to relax these restrictions should they want to. In Spain (which borders the Côa Valley project), it is now legal for farmers to leave out carcasses for scavengers. Until recently, however, this was not the case in Portugal, depriving vultures of a potential food source and creating an ecological barrier between the two countries. As a result, vultures in Portugal are still heavily reliant on artificial feeding stations. 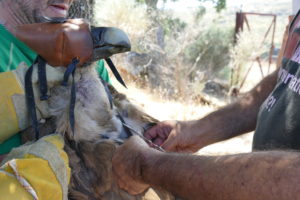 To better understand feeding behaviour in their project area, last year the Côa Valley team tagged five griffon vultures with GPS transmitters (see photo, right. Photo credit: Rewilding Europe). Data from these devices will provide valuable information on where the vultures go to feed and what types of carrion they feed on. This is the first time that the area’s griffon vulture population has been monitored in this way, and will no doubt provide critical insight into how best to support these species in the long-term.

Another ELP-funded project in Portugal is in the south of the country, led by Liga Para Proteção da Natureza (LPN). Over the last decade, LPN and partners have been working to re-establish the black (cinereous) vulture in Margem Esquerda (Eastern Guadiana Valley). They eventually succeeded in 2015 and have continued to keep supporting this species ever since. Now, with funding from the ELP, the project aims to expand the scope of their work in this Montado Mosaic landscape. They aim to support recovery of the black vulture as well as provide wider ecosystem benefits, including providing new opportunities for local economic development (particularly through ecotourism). 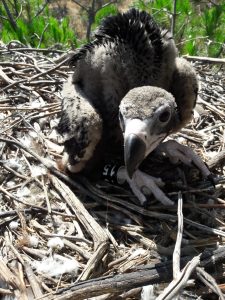 After only a recent comeback to the country, the black vulture is still critically endangered in Portugal, and this project area is home to the only breeding colony in southern Portugal (one of only three in the entire country). This year LPN recorded ten nesting pairs in the project area – on both artificial platforms and natural nests. Out of a total of ten nesting pairs, eight eggs were laid, six hatched, and despite three chicks sadly not surviving the harsh summer three chicks fledged successfully (see photo, left. Photo credit: Carlos Pacheco). This is the sixth year in a row that the black vulture has successfully bred in the region – and continued to either maintain or increase their number of breeding pairs.

“We are really pleased to be able to celebrate the successful fledging of three black vulture chicks this year,” says Project Manager Eduardo Santos. “But we also recognise that many worrying threats still face their recovery here, including illegal poisoning and insufficient food availability. Contamination of feeding resources (for example from poison, lead from ammunition and veterinary drugs) are, like in many other countries, still the greatest risk to vultures’ survival in Portugal.”

The team believes there is much more work to be done and aims for their conservation efforts to be maintained and expanded – for the full recovery of the black vultures as well as other vulture species in Portugal. As Eduardo puts it, vultures are “nature’s cleaning crew” and essential to the balance and health of ecosystems.

On the other side of Europe’s map is the rugged landscape of the Iori River Valley, located in southeast Georgia. Past the imposing cliff faces of the region’s so-called ‘badlands’ lies a unique riverine and associated gallery forest habitat supporting a range of life – including the Egyptian vulture and many other birds of prey.

Similar to the Côa Valley project, here local Georgian project partner SABUKO are also working with local ministries to protect vultures. In an example of the trade-offs sometimes faced between biodiversity protection and tackling climate change, SABUKO have opposed a development project which aims to introduce a wind turbine farm with around 30 turbines, but would create a serious hazard for the vulture population and other bird species. 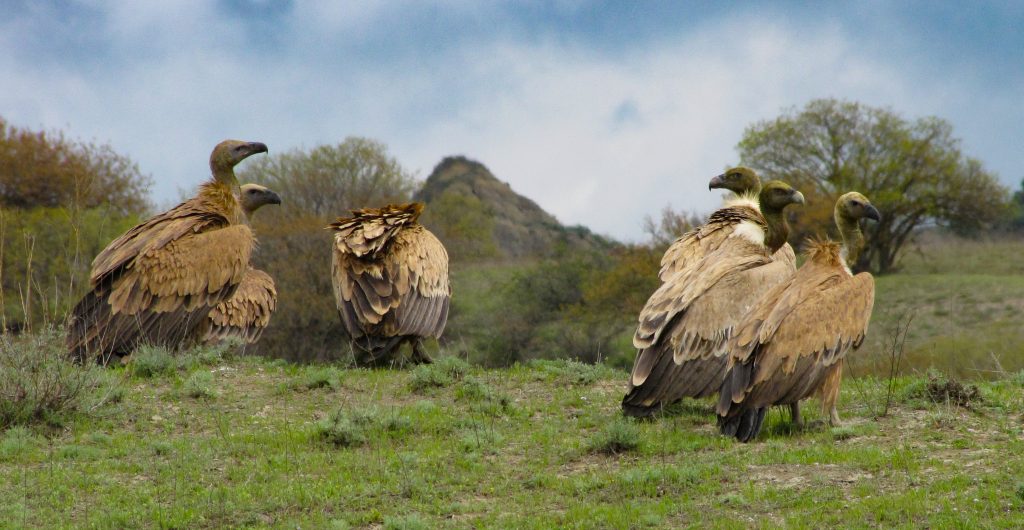 Despite recovery in some parts of Europe, factors such as habitat loss, wind turbine construction and food availability are ongoing threats for vulture populations. Photo credit: Teimuraz Popiashvili.

Since 2018, SABUKO have monitored populations of Egyptian vulture in the Kvernaki Ridge, a protected Emerald site. The project has recorded four nests in the area, two of which are in close proximity to the proposed wind turbine development. Populations of Egyptian vulture are already in worrying decline in Georgia, so the increased risk of collision with wind turbines is of great concern to SABUKO. While the team value the importance of moving to more renewable sources of energy, they suggested to the local ministry that the project be moved further from the nesting sites.

Unfortunately, the wind turbine project still looks like it will go ahead with ministry support, but SABUKO are continuing to campaign against it and are undeterred in their aim to raise awareness about Egyptian vultures and advocate for their protection.

To find out more about the projects we fund and how they are working to restore landscapes for life in Europe, please visit our main Projects page.