Making Space for Nature – past, present and future. A talk by Professor Sir John Lawton

Professor Sir John Lawton is chair of the Endangered Landscapes Programme’s Oversight and Selection Panel. Sir John has played a major part in promoting UK-wide wildlife conservation, leading the ‘Lawton Review’ of the resilience and adequacy of England’s wildlife sites, published in 2010. Earlier this month he delivered a talk at the Cambridge Conservation Initiative. Here he provides an outline of his lecture. 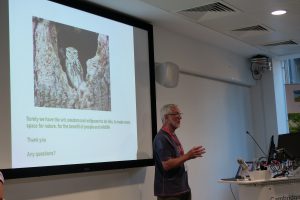 “The lecture reviews past, present and future

approaches to the conservation of terrestrial and freshwater habitats in

the UK commencing with the Hon. Charles Rothschild’s pioneering efforts in 1912. From that time until late in the 20th Century, the focus was on the preservation of surviving remnants of existing wildlife-rich sites – basically the creation of now familiar nature reserves.

That approach remains invaluable, but as the most recent State of Nature 2016 report shows, UK wildlife continues to decline. This absolutely does not mean that efforts to create and maintain nature reserves have been a waste of time; quite the contrary. Think how much worse a situation we would find ourselves in today without them.

From roughly the 1950s onwards conservationists began to add other approaches. At first these were largely focussed on habitat creation within existing reserves. The Scrape at RSPB’s Minsmere reserve is a good, early example. Then from roughly the early 1990s we started to re-create habitats on new land outside existing reserves; RSPB’s Lakenheath Fen created on former carrot fields is another early example. With hindsight it is puzzling that it took so long for the idea to catch on.

The efforts now going in to habitat re-creation and restoration are many and varied, and are reviewed in the lecture. The final phase in this journey started in about 2000, and involves large-scale re-wilding, for example in Ennerdale in the Lake District. It remains to be seen whether these exciting developments are now at sufficient scale in aggregate to halt and even reverse ongoing declines in the UK’s wildlife.”

You can listen to the lecture in full here.

Professor Sir John Lawton is currently President of the Yorkshire Wildlife Trust and a Vice President of the RSPB. He has held a number of pivotal roles, including Chief Executive of the Natural Environment Research Council for 6 years. He was Chairman of the Royal Commission on Environmental Pollution from 2005 until its closure in 2011.