Natural solutions to protect the Humber Estuary from sea-level rise

In the fourth of our landscape restoration and climate change mini-series, Matt Burnett, the Communications Coordinator for the Endangered Landscape Programme, spoke to Steve Scoffin, from the Yorkshire Wildlife Trust, who has been managing the ELP Planning Project in the Humber Estuary, UK.

MB: Tell me about the Humber Estuary Project.

SS: The Yorkshire Wildlife Trust and Lincolnshire Wildlife Trust are the lead organisations for the Humber Coastal Conservation Project (HCCP). The project covers an area of just over 28,600 ha from where the Trent and the Ouse join to form the estuary to the Outer Humber and the North Sea.

The vision for HCCP is for the estuary to be a sustainable and diverse environment that benefits people and wildlife through increased natural functioning of ecological processes and resilience to climate change, which complements a prosperous and vibrant economy.

We have been working on the potential for connectivity for wildlife in marine, agricultural and urban/industrial environments.  Some projects are for key species, such as beach nesting birds, native oysters, seagrass or the sea aster mining bee; while other work focuses on habitats like river corridors, road and railway verges and saltmarsh.  We also must acknowledge and work with existing partnerships and organisations to look at adding value to work already being carried out.  Key to this has been mapping the estuary and its hinterland to look at potential projects for future work. 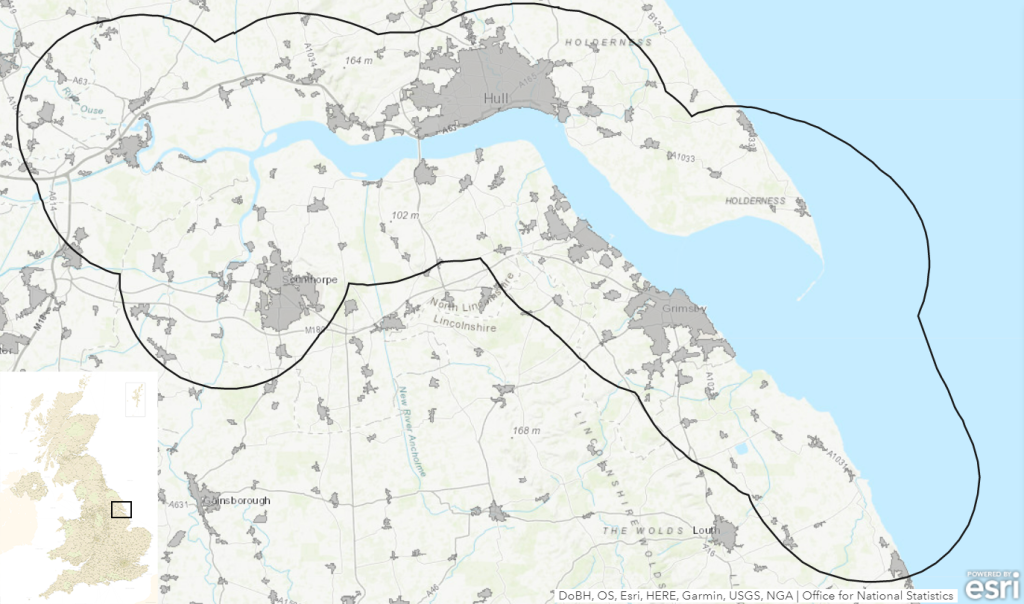 SS: COP26 has the four aims of Mitigation, Adaptation, Finance and Collaboration.  By working on projects that increase the amount of land available for creation of intertidal habitats such as saltmarsh, identifying areas where biodiversity and connectivity can be enhanced including in urban and industrial areas, and identifying communities and stakeholders and ways to engage with them, HCCP ties in closely with the aims of COP26.

Tidal saltmarshes have the potential for annual CO2 sequestration rates at 50x the rate of tropical rainforests and for every 40m depth, 20% of energy and height is removed from wave in storm surge, making them effective sea defences.

MB: What were some of the challenges you faced?

SS: The importance of the Humber for biodiversity is recognised with a range of international and national designations which collectively make up the Humber European Marine Site (EMS), and the project area has been drawn as a 10 km buffer for the EMS boundary.  This designation requires compensation or mitigation for habitat loss and, with sea level rise, habitat is being lost through inundation on top of the loss from industrial development.

That development will continue as the Humber has been accepted as one of the Freeports designated by the UK government since leaving the EU.  While many of these developments have conditions attached to planning consent which require sites to be established for wildlife this has not always been done with real compensation for lost habitat.  Work on the South Humber Gateway has set a new level for these sites with large areas of wet grassland being set up through developers paying contributions towards the purchase costs of these areas.

Challenges can be quite simple and based on people’s sense of place.  Many of the organisations that we deal with are based on the boundaries of Yorkshire (north bank) and Lincolnshire (south bank) to the extent that there are different approaches within the Environment Agency to vegetation management on flood defences between the north and south banks of the estuary.

Taking that further, the tendency has been to deal with issues when and where they occur, so treating the result rather than the cause of a problem at a local scale.  This will usually have consequences elsewhere and a key challenge is to get Humber-wide management solutions adopted which recognise that the estuary is a dynamic ecosystem.  Both the Humber Coastal Conservation Project and the Environment Agency’s “Humber 2100+ Strategy” recognise the need for a systems approach for the Humber and that climate change and resulting sea level rise will require new ways of working over the next hundred years. 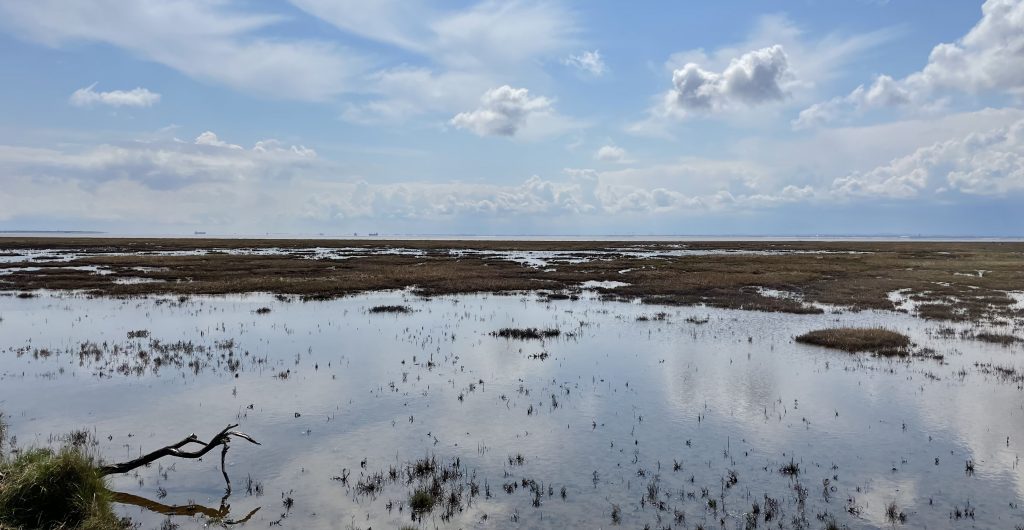 Saltmarsh in the Estuary at high tide. Photo: Steve Scoffin.

MB: What is the outcome of the work so far?

SS: The main outcome will be a feasibility study to set a roadmap for projects and potential work covering the next 10 years, the period up to 25 years from now and possibilities for the next 100 years.

Outcomes so far in developing that process have included talking to industry through the Centre for Assessment for Technical Competence Humber (CATCH) and Humber Nature Partnership to highlight the need for nature-based solutions as a way of addressing climate change issues and flood risk management.

The use of a ‘triangle of engagement’ with the points showing biodiversity connectivity, climate change resilience and flood risk management has been a relatively easy concept to use to show that, whichever one of those points is the entry into discussions about future management of the Humber, all three are clearly interrelated and that use of natural processes in dealing with one will also have positive benefits for the others.

Connectivity is not just about wildlife, it’s also about people.  Despite many suggestions that approaching both Highways England and Network Rail would be a waste of time, both agencies are now starting to take biodiversity and climate change resilience seriously in their asset management.  By making those links, HCCP has been able to bring together those agencies and local authorities, starting a conversation that will identify where there is potential for joint working and management.

MB: Why did you choose to do this work?

SS: Working on the Humber presents a unique set of challenges. Projects have worked in marine, urban or agricultural habitats but rarely at the interface between all three.  Add to that the increasing awareness of climate change, the need for working to reduce carbon emissions and sequester carbon, and the predicted change in sea level and you have in the Humber Coastal Conservation Project what was recently described by one local authority senior manager as a “mind-bogglingly complex project”.  That challenge was and remains what attracted me to this work. 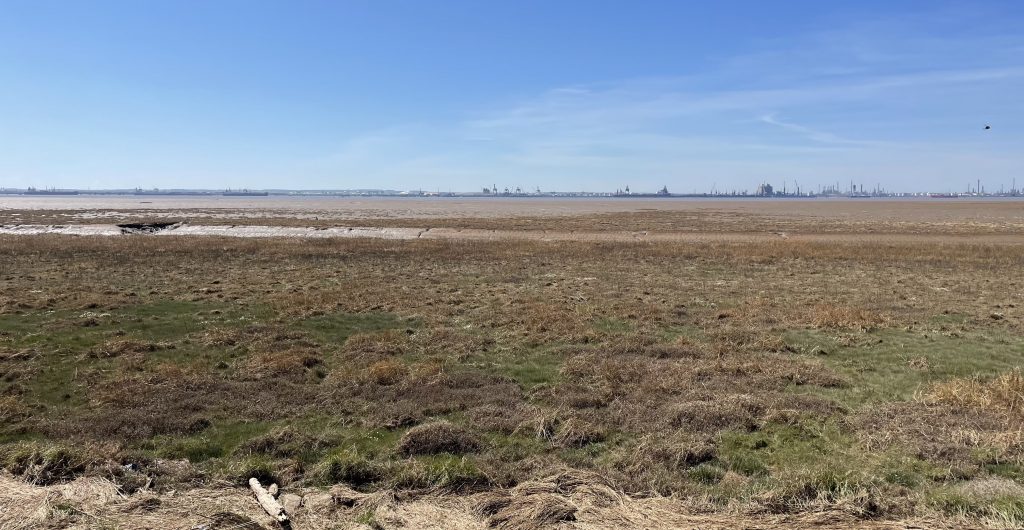 MB: Are you hopeful about our ability to respond to climate change?

SS: I think a school report would say ‘could do better’.  There are plenty of examples where political rhetoric says that the UK is ‘world-leading’ but evidence often suggests otherwise.

Having said that, the adoption of the approach of ‘public money for public goods’ is a very welcome change and evidence of it being applied to supporting farmers and landowners is in the current ‘Farming in Protected Landscapes’ programme in England’s National Parks and Areas Of Natural Beauty.  By targeting climate, nature, people and place, this has the potential to make a real difference in farming practice and in taking climate change resilience into mainstream thinking.  That includes rolling out the approach to all support for farmers and landowners, and that would certainly mark a major change in the way that the land around the Humber is both perceived and managed.

MB: What is one thing readers should take away from your experience?

SS: Do not give up on challenging people to justify what they do because “it’s what we’ve always done” (if that was the case, I’d suggest that we’d still be hanging around waiting for someone to discover how to start fires) and to seek new ways of working, especially collaboratively.