Dappled sunlight falls through fragrant Scot’s pine boughs, warming the skin. Creamy sprays of rowan flowers shine brightly in the sunlight, and glow ghostly in the shade. A hint of movement draws the eye. There, feeding on the rowan flowers, is the most beautiful insect. Its dark body is set off by the burst of orange on the abdomen and glint of yellow on the face. Then you spot another, beside it. You turn to a majestic Granny pine and see a third hoverfly, crawling into the damp gap where a branch came down last winter.

This image of a diverse Scot’s pine forest filled with the glorious sight of pine hoverflies going about their business, has sustained years of hard work by countless people. And it is an image the ELP-funded Cairngorms Connect project are now one step closer to.

The Critically Endangered pine hoverfly (Blera fallax) holds the dubious accolade of being both very beautiful and very rare. The species is currently known only from one site in the UK, in the Cairngorms National Park. Pine hoverflies require a combination of rot holes in Scot’s pine trees (Pinus sylvestris) for larval development and a flowering understory, on which the adult flies feed on nectar. Their favoured flowers are from the rowan tree (Sorbus aucuparia). 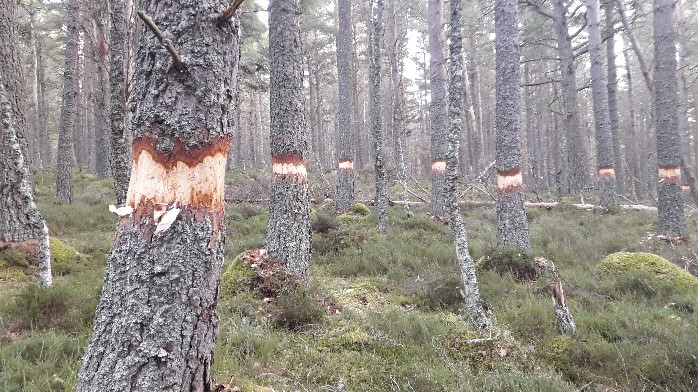 The Cairngorms Connect project team is creating deadwood to support invertebrates such as the pine hoverfly, for example through a process called ‘ring barking’ which is depicted here. Photo: Cairngorms Connect.

Unfortunately, with changes in forestry practices and land use over the past century, diverse forests with old trees, deadwood and a rich broadleaf understory have become rare. This has not only affected the pine hoverfly, but also numerous other species which rely on complex woodlands, such as the blood-red longhorn beetle (Anastrangalia sanguinolenta), another Critically Endangered Caledonian pine forest specialist.

Work to remedy this situation began many years ago, with intense surveys for pine hoverflies and the development of a rot hole creating technique by the Malloch Society. This work was subsequently taken up by the Pine Hoverfly steering group and Rare Invertebrates in the Cairngorms Connect project, inspiring local people to help in monitoring for the species and creating habitat. 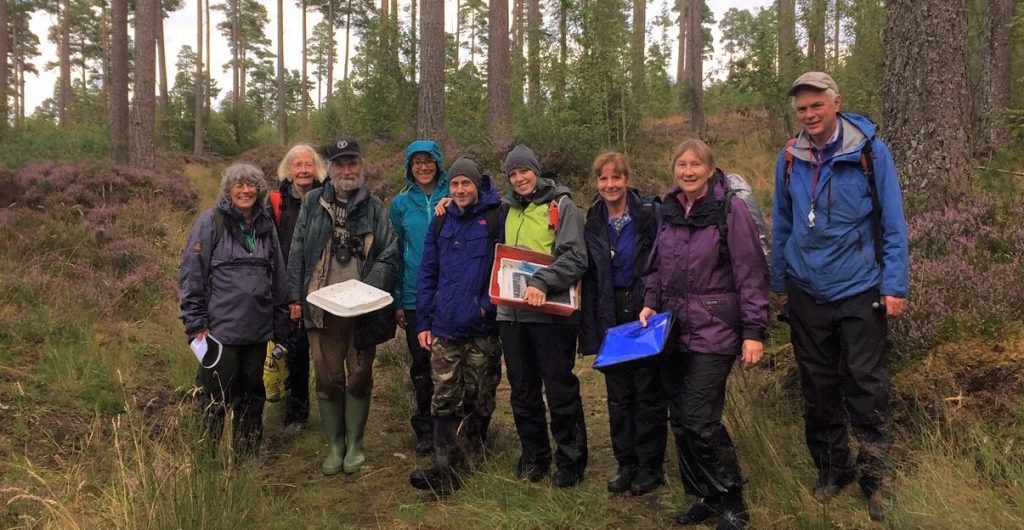 Pine hoverfly surveys were taken in 2019 by a number of volunteers. Photo: Gabrielle Flinn.

The aim is two-fold. These groups work with local communities and landowners on short-term management, providing artificially created rot holes. They also support land managers in their work to re-diversify forests, opening up the canopy to allow mature trees the space to develop and managing the impacts of grazing on young rowan saplings. This will provide suitable habitat for the flies in the long-term.

At the same time, a pine hoverfly conservation breeding programme was set up with the Royal Zoological Society of Scotland (RZSS), first based at Edinburgh Zoo before moving to the Highland Wildlife Park. After an initial steep learning curve, the programme has had enormous success, producing over 8,000 pine hoverfly larvae in 2021. 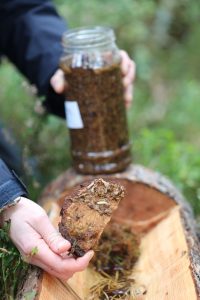 The culmination of this work by so many different people meant that pine hoverflies could be first released back into the wild in autumn 2021, with nearly 3,000 larvae released across four sites within the Cairngorms Connect project areas (see left, photo by Jess Wise, RZSS); RSPB Abernethy Forest and Forestry and Land Scotland Glenmore. The project team returned to those sites in March to release a further 3,000 larvae, giving these new populations the best chance of survival.

There will be more work to come, with adult and larval monitoring, on-going habitat creation and the continuation of the breeding programme. But for now, there is a celebration to be had about these fantastic flies being back in these forests, leading the way for all the incredible invertebrates, plants and fungi which thrive in diversity.

This edited article reproduced with thanks to the ELP-funded Cairngorms Connect project, and was originally written by RIC project officer, Genevieve Tompkins.