TAIR Collective – consisting of artists Manon Awst, Beth Celyn & Judith Musker Turner – will work in close collaboration with Summit to Sea to support the project in its current exploration phase. They will deliver a participatory project which will use the arts to ensure that people and communities involved in the project feel heard and represented. They plan to create a multimedia artwork using materials collected by and with communities, gathering stories and testimonies along the way which will be developed into a multimedia performance piece to be toured within the project area.

Having studied Architecture at Cambridge University and Artistic Research at the Royal College of Art, Manon Awst explores sites through sculptures, films and performances. She is a recipient of a Creative Wales Award, Arts Council of Wales and works as Coordinator of Public Spaces at Pontio, Bangor University.

Beth Celyn is a singer-songwriter and poet. She has worked with communities across Wales and performed at the likes of Festival No.6 and BBC 1. She is a King’s College London graduate, has an MA in Welsh Creative Writing from Bangor University and was a commissioned poet at the National Eisteddfod of Wales in 2019.

Judith Musker Turner is a poet and textile artist from Ceredigion. She has exhibited at Suns Europe and the European Festival of Performing Arts in Minority Languages. She graduated with an MA in Welsh and Celtic Studies from Cardiff University in 2019, and is a Development Officer at Wales Arts International. 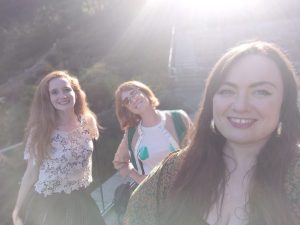 The artists: Judith, Mannon and Beth