Reconnecting the lakes and communities of the Danube Delta

David Thomas, the ELP’s Director, and Nancy Ockendon, Science Manager, made a recent visit to the Danube Delta, one of the ELP’s Restoration Landscapes. Here David writes about the first day of the visit and reflects on the impact of modifying the natural flow of rivers and wetlands on nature and people.

Looking at the plates of food spread before us, as we sat for lunch in the shade of a large Aspen tree with serving bowls piled high with boiled fish, it would have been easy to believe that the adjacent Kartal lake, one of many in the Danube Delta, supported a healthy fishery. But our hosts, members of the community of Reni, explained that this wasn’t the case: “In the past a good fish soup would contain at least seven different fish species caught from the lake. Here we only have two – carp and catfish. The lake isn’t what it was”. 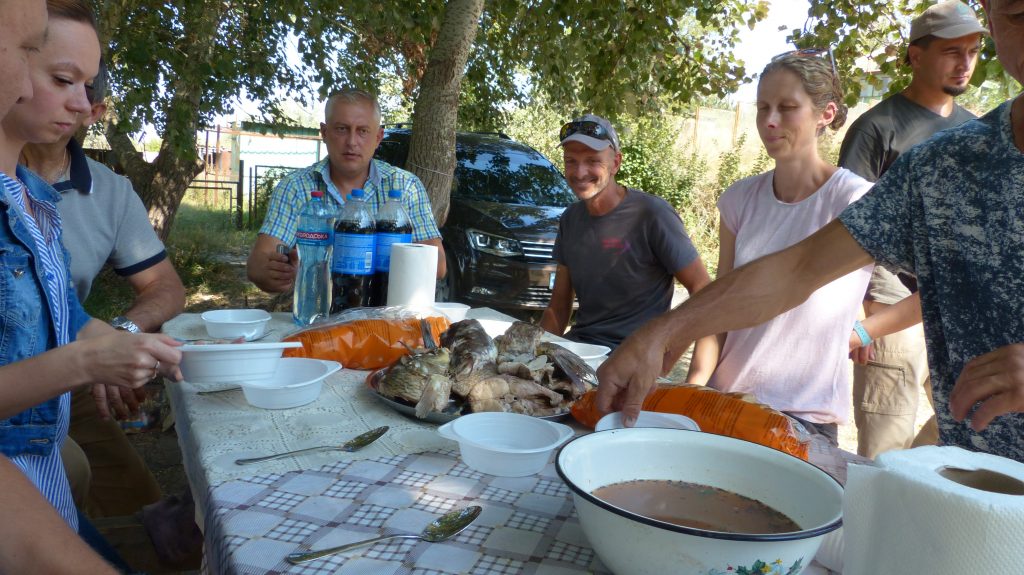 Having eaten my lunch, and leaving those remaining at the table to resolve a disagreement about whether it was customary to drink the bouillon first or eat the fish, I wandered down to the water’s edge. Mykhailo Nesterenko (Misha), Team Leader of Rewilding Ukraine, came up beside me and pointed to a spikey plant floating across much of the lake’s surface. “There’s another sign of the disruption to the natural ecosystem” he explained. “It’s called Water soldier [Stratiotes aloides]. It’s a native species, but with the stagnation of water flow caused by sluices and weirs it has spread. They don’t like it locally because it hinders navigation and reduces the area of open water available for fishing”. 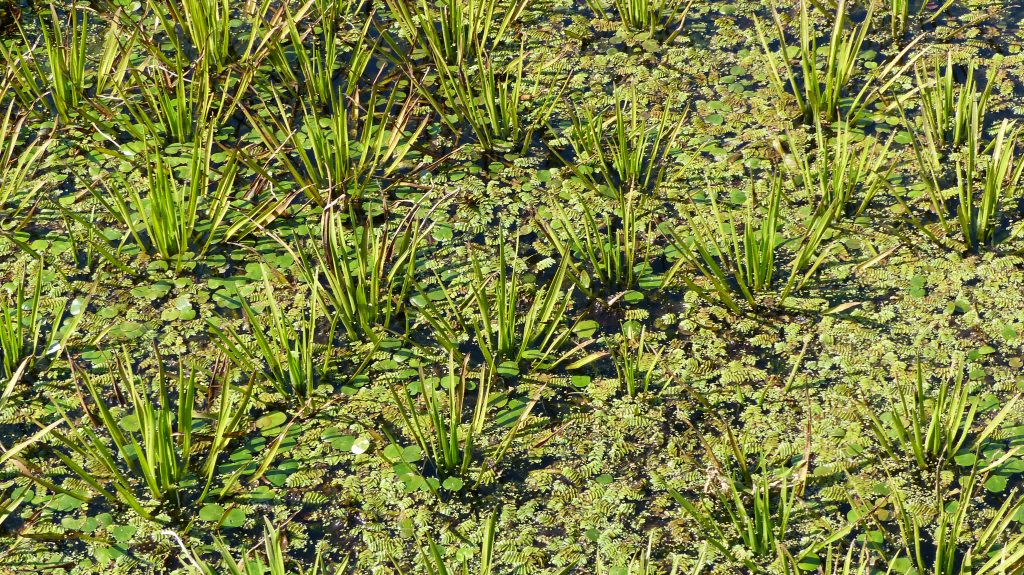 Water soldier is much more prevelant in the disrupted ecosystem. Photo: David Thomas

All these changes have their roots in water management schemes that began during Ukraine’s Soviet-era past, as attempts were made to use the Danube Delta’s lakes for cultivation of rice or as reservoirs. Connections between many freshwater lakes were broken or were managed through sluices. But the schemes were nearly all ultimately failures.

Later that day we stood at one of these sluices, where moments before Squacco herons had been roosting in the shade. Oleg Dyakov, Rewilding Officer, explained the typical pattern of events and their consequences as we studied a map of the delta and its waterbodies: “Under natural conditions lakes were connected to the river – fish could pass freely for spawning and water levels would rise and fall with the seasons. Sometimes lakes would have dried out completely. The sluices prevent the passage of fish between the river and the lakes. Because the economies of most of the communities around here are traditionally more dependent on fishing than agriculture that has a serious impact on local livelihoods”. 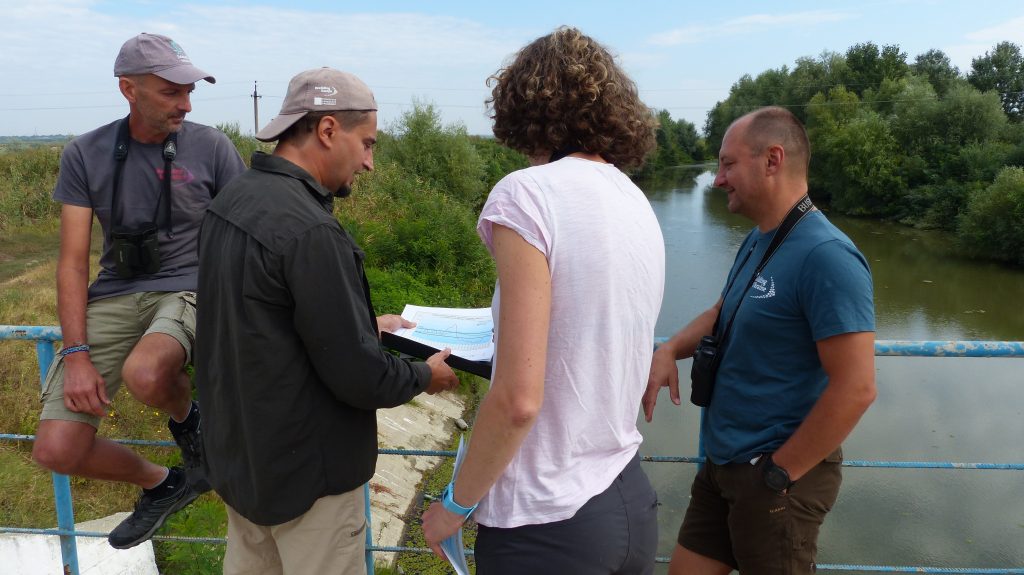 Rewilding officer Oleg Dyakov explains why it is important for water bodies to be connected. Photo: David Thomas

And as Oleg explained, it isn’t just the fishery that is affected. The natural dynamics of the river created an ecosystem with fluctuating water levels that helped to maintain a mosaic of habitats. More stable water levels have led to the spread of dense reed beds, inaccessible to fish and unsuitable as breeding or feeding areas for waterfowl. Without the seasonal flushing and drying out sediments are increasing and lakes are becoming shallower, murkier and more mineral rich. Nature has taken a hit.

Rewilding Ukraine are working with local partners to restore connectivity between lakes and the River Danube, and establish a more natural, dynamic water regime that will benefit nature and people. The communities that we met were enthusiastic about the opportunities this will offer. At the village of Novoselske, under the leadership of the council leader Igor Plehov, plans are being made to re-develop the site of a former and now largely derelict camp site as an eco-resort. As we discussed their plans standing on a jetty among the reeds it seemed perfectly situated, on the banks of Lake Kartal with access for boating, angling and walking. 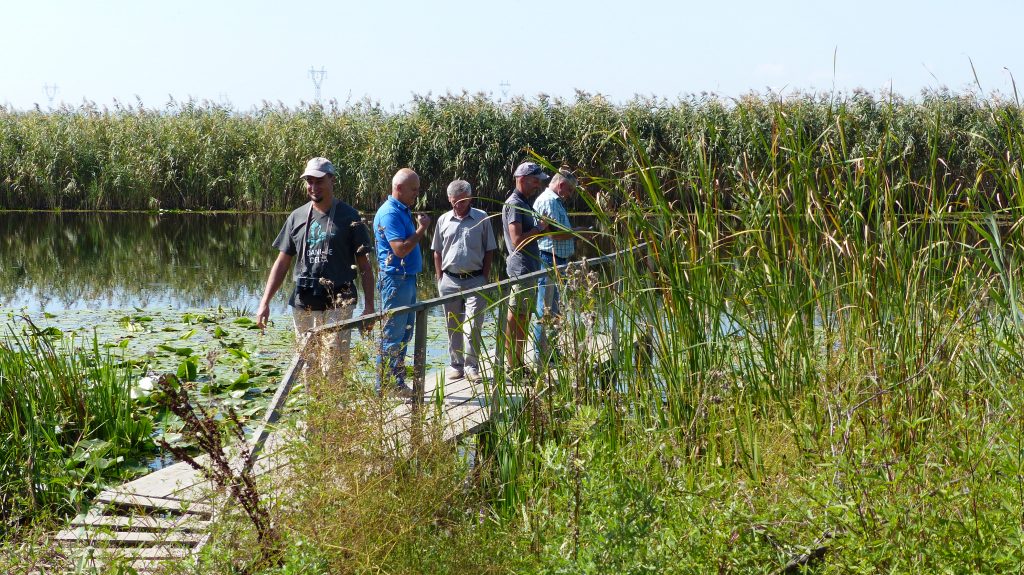 The ELP and Danube Delta teams discuss plans for the area

Further downstream we visited Kartal lake meadows, where dredging the channel had restored water flows and annual flooding some years previously. Misha pointed to extensive pastures where sheep, domestic geese and the occasional cow were grazing whilst a marsh harrier patrolled above the reedbed: “This area was bone dry – it never flooded and was bare of vegetation, pretty useless for cultivation or grazing. Since the water flow was restored, it floods each year, and you can see how it is now being used by the community. It is one of the few remaining areas of common land so it is really important to people living here with livestock”. 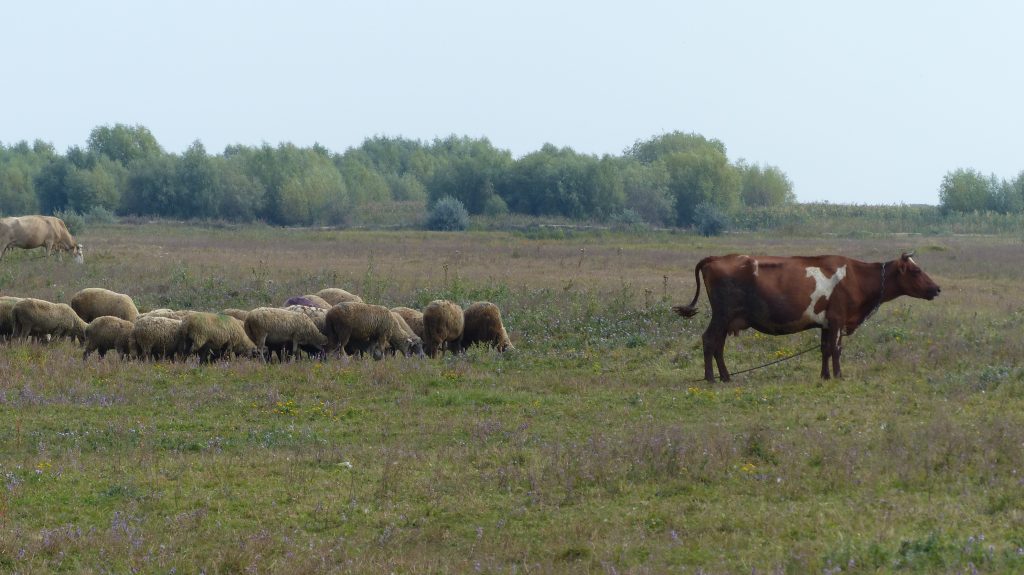 Water, that most fundamental and essential of natural resources, has been managed for millennia. Ever since Sumerians settled in the area bordering the Tigris and Euphrates rivers in about 4000 BC, and started to irrigate the ‘Fertile Crescent’, rivers, lakes and wetlands have been made less natural as water is redistributed in space and time for agricultural and domestic use. Civilisations have been built on the management of rivers and water, but as the Danube Delta demonstrates, such manipulation can have unpredictable long-term consequences and benefits can be temporary and illusive.

What was striking about the restoration interventions that are being planned or implemented by Rewilding Ukraine was the level of local support. Everywhere we went we heard the same plea – from local communities, government agencies, local businesses – for a reversion to a more natural, dynamic water management regime that would support fisheries, tourism, pastoralism and water transport. As we stood by the sluice that connects Lakes Kartal and Katlabuh, I asked Aphanacy Zechkov, Head of the Izmail Water Resources Department, what ‘success’ would look like from his perspective. His response seemed to speak for many of the people we met during that visit:

“In the past we modified the natural system. Now we understand the consequences and need to reverse some of those changes. We will have been successful when those reversals lead to a restoration of the fishery and a thriving tourism industry providing jobs for local people”.