In the second episode of our landscape restoration and climate change mini-series, Matt Burnett, the Communications Coordinator for the Endangered Landscape Programme, spoke to Zafer Kızılkaya, the President of the Mediterranean Conservation Society and one of the partners for the ELP-funded Gökova Bay to Cape Gelidonya project.

MB: What have you been doing to help prepare the Turkish coast for climate change?

ZK: Our major attempt to increase the resilience of marine ecosystems against climate change was establishing no-fishing zones with the designation ‘Fully Protected Area’ along the Turkish Mediterranean coast. Invasive species, over-fishing and illegal fishing drastically deteriorated marine ecosystems in the Eastern Mediterranean. Without preying pressure, the population of invasive herbivore rabbitfishes was out of control. The rabbitfishes gradually grazed the entire canopy of macroalgae over the rocky sea bottom and turned this essential carpet algae ecosystem into barren rocks. Lack of macroalgae cover resulted in immense loss of biodiversity, primary production, CO2 absorption, feeding and nursery grounds. The cascading effect of this ecosystem loss, multiplied by overfishing, led to the Turkish Mediterranean coast having the least fish biomass in the Mediterranean. Fully Protected Areas with proper enforcement established in 2010 and then 2020 during the ELP project quickly recovered the population of local apex predators like grouper species and dentex which feed on rabbitfishes. Fish biomass surveys clearly show that the apex predators’ presence decreases the rabbitfish biomass with the cascading result that macroalgae are slowly recovering. 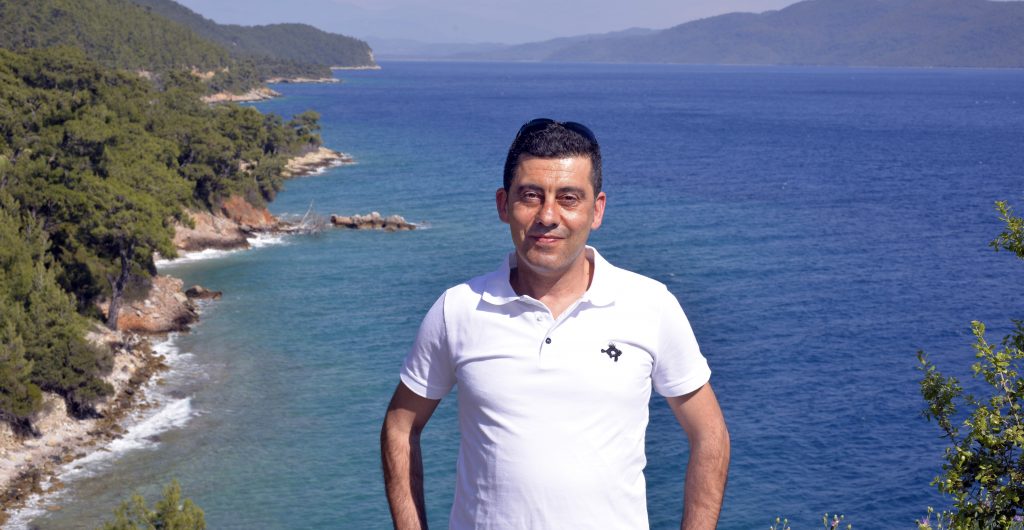 MB: What were some of the challenges you faced?

Initially we faced serious resistance from fishing communities, especially purse-seine and trawl (large, industrial fishing vessels) owners who manipulated small scale fishers. With the support of community members and the government we overcame this obstacle and established fully protected areas.

We have been monitoring seawater temperature vertically from the surface to 40 meters depth with temperature loggers every five meters. Results are eye opening as every year since 2015 rising water temperature pushes the cold water line (called the thermocline) deeper and deeper. In summer time it is 28oC to 30oC down below 35-40 meters depth, where it used to be 19-22oC. This creates serious thermal stress on coralligenous sessile organisms like corals and sponges with mass mortality events in different species every year. The increasing water temperature helps invasive species to thrive and increase their range further. In 2018 an invasive protozoa from the Red Sea triggered mass mortality of the noble pen shell or fan mussel Pinna nobilis, which is now extinct along the Turkish Mediterranean coast. The IUCN has now changed the conservation status of Pinna nobilis to ‘Critically Endangered’. Lionfish first appeared in 2011 and now they cover the entire Turkish Mediterranean coast. Similarly, pufferfish, Lagocephalus sceleratus, first appeared in 2003 and are now the biggest nuisance for fishers and ecosystems. Finally, an invasive long-spine sea urchin, Diadema setosum, covers all the coastal bottom and threatens not only other marine animals but also swimmers, fishers, and divers with their venomous spines. 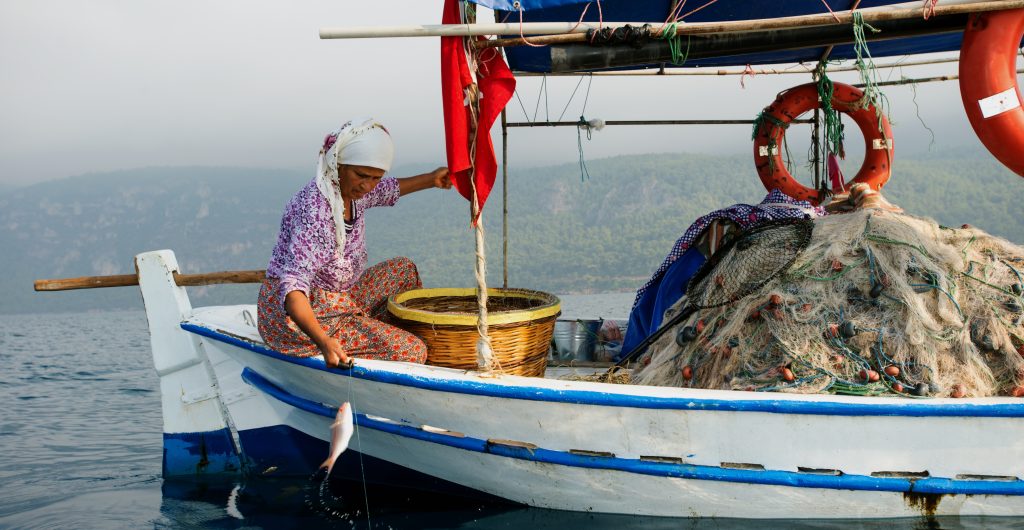 The local fisher community was resistant to the protected area at first, but now they have seen the positive impact on the fisheries, and the market for invasive species, they are much more supportive. Photo: Zafer Kizilkaya

MB: What was the outcome of your work?

In 2015, we started encouraging people to eat five of the invasive species – Randall sea bream, white rabbitfish, black rabbitfish, Red Sea red mullet and brush tooth lizardfish. That campaign was a big success. The Randall sea bream in particular has been a great income generator for the fishery cooperative. Later in 2019 within ELP, we extended this campaign to the whole country with new invasive species – lionfish, soldierfish and the long-spine sea urchin. Over 60 fine dining restaurants tried cooking with them and 11 put them on their menus. We made public awareness films and podcasts with famous chefs from across the country, held over 30 online meetings where different gourmet recipes from chefs were delivered to attendees and their opinion and support asked for. Finally, we also worked on toxic pufferfish in Turkish waters, extracting the toxin for possible use as a pharmaceutical raw material.

The extension of the Suez Canal in 2019 and increasing water temperatures will eventually turn the Eastern Mediterranean into a tropical sea. Our only option is to start consuming those invasive species to reduce their competition with local species and generate an alternative income for small scale fishers where the majority of their catch are invasives. 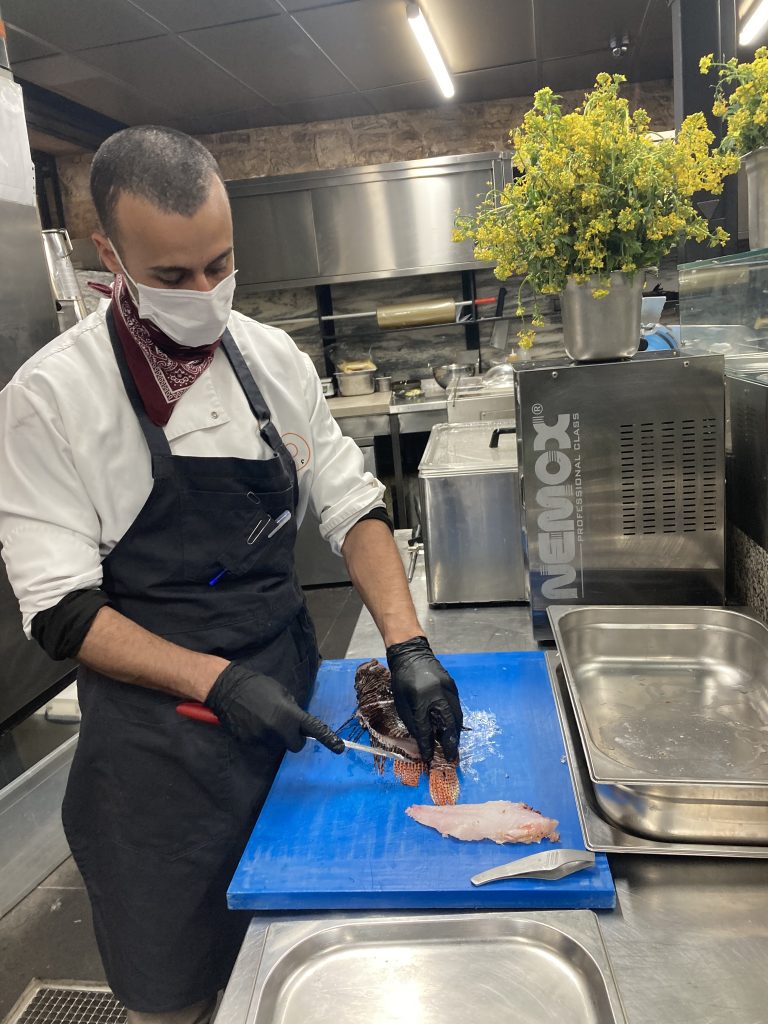 A Turkish chef prepares a meal from one of the invasive species.

MB: Why did you choose to do this work?

I love working in the marine environment. I worked for over 10 years in southeast Asia as an underwater photographer and marine conservationist. When I witnessed the loss of marine ecosystems and the role of marine protected areas, I decided to turn my fulltime energy to marine conservation and research. Working in this dynamic ecosystem is so existing and rewarding when we see the positive results. Marine protection with managers, enforcement and monitoring is expensive work and has been neglected for decades. Now what we have left is 90% fished out oceans with rapidly decreasing flagship species.

MB: Are you hopeful about our ability to combat climate change?

Well, we have already passed the point of no return in carbon emissions. We must face the serious consequences in the coming 10 years, especially in the marine environment, with changing species composition and mass mortality events. That’s why fully protected Marine Protected Areas (MPAs) are extremely important for combating the ever-increasing impacts of climate change. MPAs are laboratories where we can see, without human interference, how marine ecosystems can successfully recover from, and resists against, climate change impacts.

The new fish on the menu are allowing chefs to experiment with new dishes.

MB: What can others learn from this project?

The climate models predict gradual warming of the Mediterranean. The invasive species and seawater temperature rise will move to the Western Mediterranean too. What we experience in terms of ecosystem change will be other people’s problem soon. Any blueprints and success stories of how to adapt to this change will help others.

MB: What is one thing readers should take away from your experience?

Fully protected marine protected areas are spots of hope for biodiversity conservation and resilience against climate change effects. We proved that. We urgently need more MPAs. This is the best we can do to help marine life bounce back.