Zafer Kizilkaya is the President and co-founder of Akdeniz Koruma Dernegi, an NGO which aims to conserve natural habitats and restore degraded coastal ecosystems in Turkey. Recipient of a Whitely Gold award in 2017, and an Equator Prize in 2014, Zafer is a key figure in the conservation of Turkey’s Mediterranean coastline. On a recent visit to Cambridge we asked him about his work, and his plans for the restoration of marine habitats along Turkey’s Mediterranean coast. 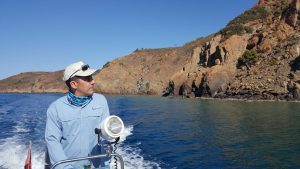 Can you tell us about your work restoring landscapes?

Gökova Bay is located on the southern Mediterranean coast of Turkey in the ‘Mediterranean Basin’ global biodiversity hotspot. Because of its unique marine and terrestrial biodiversity, selected marine and terrestrial areas of Gökova Bay were declared a special environmental protection area (SEPA) in 1988, meaning that no development has been allowed in the coastal basin in an attempt to protect the habitat and biodiversity. On the terrestrial side, the entire coastline is covered by state owned red pine forests which are governed by strict regulations on extraction and resource access. Marine resources, however, are covered by no such regulations. Since designation, the coastal waters have continued to be subject to open access fishing combined with climate change associated changes in species composition. This has led to widespread overexploitation and illegal fishing and has eroded the ability of the marine ecosystem to function.
In response to marine ecosystem degradation, declining fish diversity and abundance, and associated losses to fisher incomes, the Mediterranean Conservation Society (MCS) created a network of complete ‘no-take zones’ and fisheries restricted areas closed for industrial fishing (trawling and purse-seine fishing) in 2009. These have been managed through a marine ranger programme since 2012 that puts small-scale fishers at the forefront of surveillance compliance. Community-based enforcement strategies are complemented by cooperation with regional and national authorities. The approach has been highly successful, with more than 3,000 hectares of sensitive marine habitat protected in no-take zones, which forbid all fishing and 27,600 ha which allow small scale fishing but are closed to all industrial fishing. Fish stocks have rebounded dramatically in 7 years, as have the average incomes of fishing cooperative members. Monitoring activities confirm rejuvenated marine species diversity and abundance in the bay, which is an important nursing ground for diverse endangered marine species, including Mediterranean monk seals and sandbar sharks.
Over the next 5 years, we hope to work on a larger scale over 400 km of coastal areas to the east of Gökova Bay covering various important and unique habitats, both within existing SEPA designations and in some as yet unprotected areas. This would create connectivity between marine protected areas where many species find refuge from thousands of years of over exploitation. Our monitoring studies have shown that well-enforced no fishing zones enable the ecosystem to regain its equilibrium against the impact of invasive alien species on the ecosystem where the food chain is restored with higher trophic level local species.

What are the greatest challenges you face with restoration work in your area?

The greatest challenge at the beginning was gaining the trust of the local community with which we wanted to develop long term and sustainable solutions. Once they had seen the positive results directly affecting their livelihoods, their sense of ownership over conservation measures and support to the project was secured. Currently, however, enforcement by local marine rangers is still one of the biggest challenges in terms of its sensitivity. A central part of our enforcement approach has been raising local awareness about the location and importance of no-take zones. It has been a long road but, as the protected areas mature and the increase in fish stocks is visible even by the naked eye, the advantages of spill over are becoming increasingly evident and increased levels of voluntary compliance are being seen.
Another on-going issue is the sheer volume of discarded and lost fishing gear in the local area, most of which is plastic and accumulated over decades. This will need a massive and co-ordinated clean-up effort, involving a lot of time and resources – at times it feels like never ending restoration work.
Finally, as the geographic coverage increases, we need more trained staff for monitoring and other scientific activities. Keeping trained staff on board comes with financial burdens. To date most of our resources have focussed on enforcement activities, but our long-term ambitions mean that we will need to grow as an organisation, and to diversify our activities and staffing.

What are your hopes for the future?

Our work in Turkey illustrates that no-take zones are critical to restoring marine ecosystem function after years of overfishing. However complete no-take zones in the Mediterranean currently cover just 0.04% of the total marine area. The UN states that over 90% of the world fish stocks are thought to be exploited at unsustainable levels. We are still a long way from the Convention of Biological Diversity (CBD) target of protecting 10% of the world oceans as fully protected No Take Zones by 2020. My hope is that some of the 35 billion USD given to large scale world fisheries annually as subsidies, which I would argue only serves to drive further overfishing, be redirected to promote more MPAs or support small scale fishers. With less than half of this figure we could put 20% of the worlds’ oceans under strict enforcement, simultaneously creating over a million jobs as marine rangers, park managers or tourist guides. This will restore fish stocks, improve the resilience of marine ecosystems and make fisheries much more sustainable.
In terms of closer to home, we hope our project will become a role model for successful Mediterranean marine restoration projects. Turkey is very close to fulfilling its national CBD targets for marine conservation. We want to see marine protected areas at least doubled in Turkey in the next five years and success stories communicated widely to national, regional and international audiences. In the future, we hope to build upon our successes to engage the government and support them to be more proactive in marine management and enforcement activities. In 2010, we started from a scratch; but now we feel like the wind is behind us. Fortune favors the brave…