Second herd of kulan arrives in the Ukrainian Danube Delta

The arrival of 20 more kulan on the Tarutino Steppe is part of a long-term reintroduction programme. The animals will fill an important ecological niche and enhance biodiversity.

Towards a wilder steppe

A herd of 20 kulan (roughly two-thirds female) has arrived on the Tarutino Steppe, an 8000-hectare swathe of grassland that forms part of the extended Danube Delta landscape restoration area in southwest Ukraine. This is the second shipment of kulan (also known as the Asiatic wild ass) to arrive in the area – the first arrived in May 2020 and has just been released into the wild. The newly arrived herd will stay in a 31-hectare acclimatisation enclosure until they too are released in the spring, when new grass is sprouting on the steppe.

The arrival of the new kulan herd is part of a long-term reintroduction programme. Following a positive feasibility study, the programme aims to establish a viable, free-roaming herd of 250 to 300 individuals in the Danube Delta region by 2035. As part of a wilder vision for the steppe, the animals will fill an important ecological niche, enhancing local wild nature, reducing wildfire risk, and boosting the local economy through tourism. All the kulan involved in the programme will be sourced from the Askania-Nova Biosphere Reserve in southern Ukraine, where a small herd was brought from Turkmenistan in 1950. 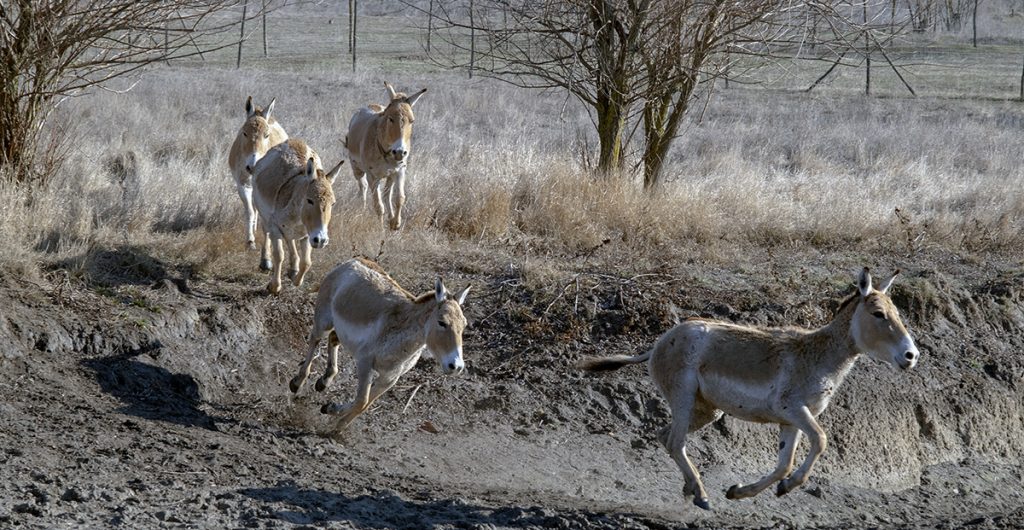 Preparation and release to the wild of the first herd of kulan (Equus hemionus) in the Tarutinskaya steppe, Frumushika-Nova, Ukraine. Photo: Andrey Nekrasov.

The Tarutino Steppe is one of the few remaining areas of steppe in Europe. Characterised by its expansive grassy plains, it is home to many endangered species. Without human intervention, it would ordinarily be grazed by herds of wild herbivores, such as kulan, saiga antelope and deer, although these species have all disappeared, mainly due to hunting.

As the number of kulan on the Tarutino Steppe increases, so their impact on local biodiversity and food chains will grow. Their grazing will keep grass length short, benefitting animals such as souslik (European ground squirrels) and steppe marmot and mitigating wildfire risk by reducing excess vegetation. Although the animals are expected to thrive in their new home, they will form an additional prey base for predators such as wolves, while kulan carcasses will sustain scavengers such as vultures and foxes.

In addition to the kulan, the Rewilding Ukraine team are also reintroducing steppe marmots and fallow deer onto the Tarutino Steppe – this will also help to restore local food webs and boost natural grazing.

Local residents are set to benefit from the rewilding of the Tarutino Steppe landscape too. The Rewilding Ukraine team are now cooperating with communities in the area, and a local business partner (Frumushika Nova), to develop nature-based tourism.

Some of the kulan that have just been released into the wild have been tagged with satellite transmitters, allowing the Rewilding Ukraine team to keep track of their location and further monitor and analyse their behaviour. Although kulan are no longer of hunting interest (hunting is prohibited on the Tarutino Steppe anyway), the transmitters will allow rangers – who have been selected from the local community and just completed their training – to mitigate any potential hunting or poaching threats.

“The reintroduction of kulan onto the steppe has never been attempted before,” explains Danube Delta Project Director Mykhailo Nesterenko. “So we don’t know exactly how far the animals will travel as they explore their new home. If they go too far, we will have to bring them back. We are looking forward to seeing their positive impact.”

All kulan releases are carried out by the Rewilding Ukraine team and Askania-Nova Biosphere Reserve. They are part of scaled-up rewilding efforts in the Danube Delta rewilding area, which began at the start of 2019 with funding provided by the Endangered Landscapes Programme.

A version of this article was originally published on the Rewilding Danube Delta website.