The efforts of the Iberian Highlands team to increase natural grazing were given a boost recently with the arrival of a new foal born to a herd of semi-wild Serrano horses released last year by Rewilding Spain. Natural grazing by herbivores such as Serrano horses can provide a plethora of benefits to the ecosystem, including maintaining grasslands and reducing the risk of wildfires.

Located in central-eastern Spain, the Iberian Highlands is one of the seven new large-scale restoration projects funded by the Endangered Landscapes Programme. The restoration of natural processes – such as natural grazing and scavenging – is an essential element of the overall vision for the landscape, enhancing the diversity, resilience and functionality of nature, and the benefits it provides to local communities.

“The birth of the foal shows that the Serranos are acclimatising well to their new home, which is great news for rewilding,” says Iberian Highlands team leader Pablo Schapira. “It has been wonderful to see semi-wild horses interacting with the landscape here once again.” 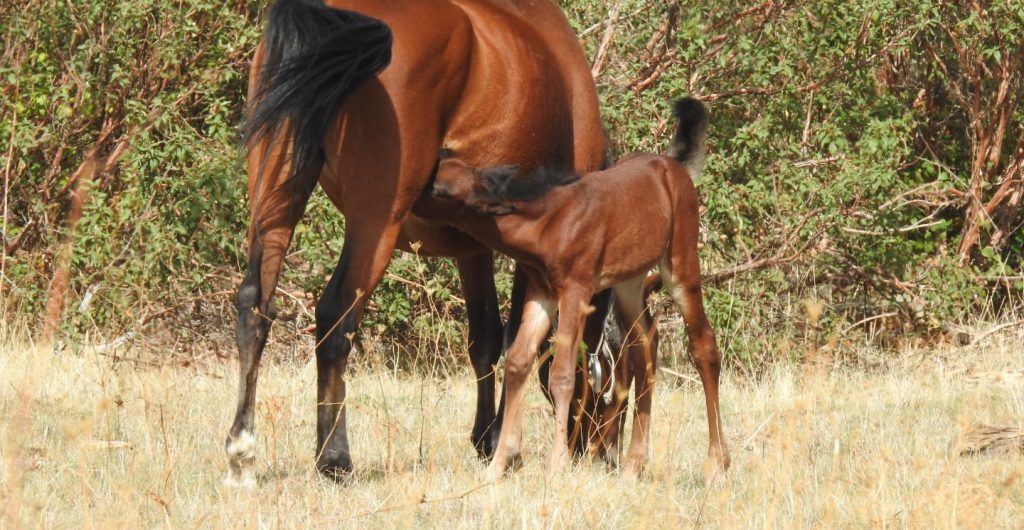 When animals are released as part of restoration efforts, the birth of new young implies that they are acclimitising well to their new environment. Photo: Pablo Schapria.

The animals, which are relatively small and hardy and typically have black or brown coats, graze in the mountains without human interference, although they receive veterinary checks once a year and are tracked with GPS collars. The new arrival increases the herd size to 13.

Large wild herbivores such as European bison and wild horses play a key role in the restoration of healthy ecosystems – their low-intensity grazing helps to improve biodiversity and regenerate forests by creating half-open, half-wooded landscapes. Their presence in ecosystems also benefits scavenging species such as vultures, and creates enabling conditions for the comeback of carnivores such as Iberian lynx in the Iberian Highlands.

Wild and semi-wild herbivores can also help to reduce the risk of damaging wildfire by clearing scrub and bushes, which in many places in the Iberian Highlands have become overgrown as domesticated livestock have disappeared from the landscape. 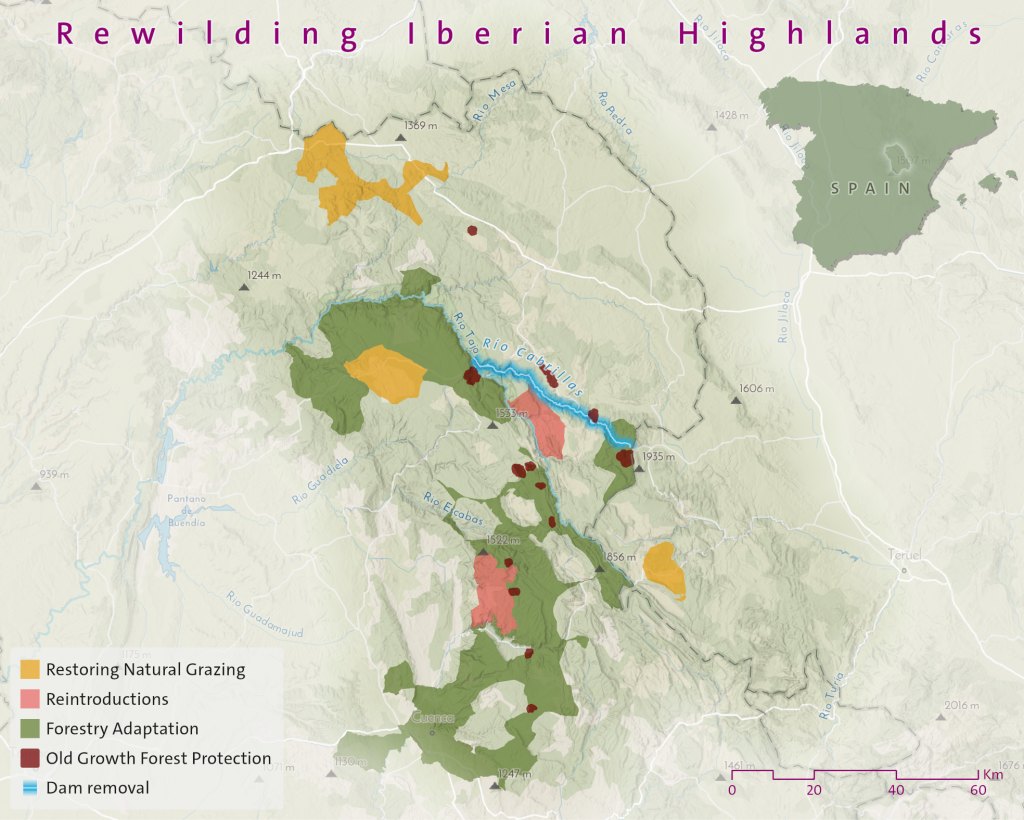 The reintroduction of herbivores is one of many restoration actions planned by the Iberian Highlands team.

As climate change continues, catastrophic wildfire is increasingly impacting Spanish landscapes and biodiversity – as it is in Portugal and many other parts of the Mediterranean. In 2005, after a catastrophic wildfire damaged nearly 12,000 hectares of pine and Pyrenean oak in the Iberian Highlands, the burnt trees were removed and the area was left to naturally regenerate. However, the groups of trees which have developed as a result are too dense and lacking in complexity, which prevents acorn production. Natural grazing by Serrano horses will open up these areas to light, leading to more structural diversity and supporting the long-term regeneration of the forest.

Involving the Serrano horse in restoration efforts will help to safeguard the animal’s continued existence. The breed, which has its origin in one of the three primitive horse ecotypes of the Iberian Peninsula, is believed to be closely related to the Losino horse, but genetic studies are still needed to clarify its relationship with the other peninsular breeds. The Serrano horse has inhabited the mountains and plateaus of the Iberian interior for centuries, as evidenced by different medieval documents and photographs taken at the beginning of the twentieth century. 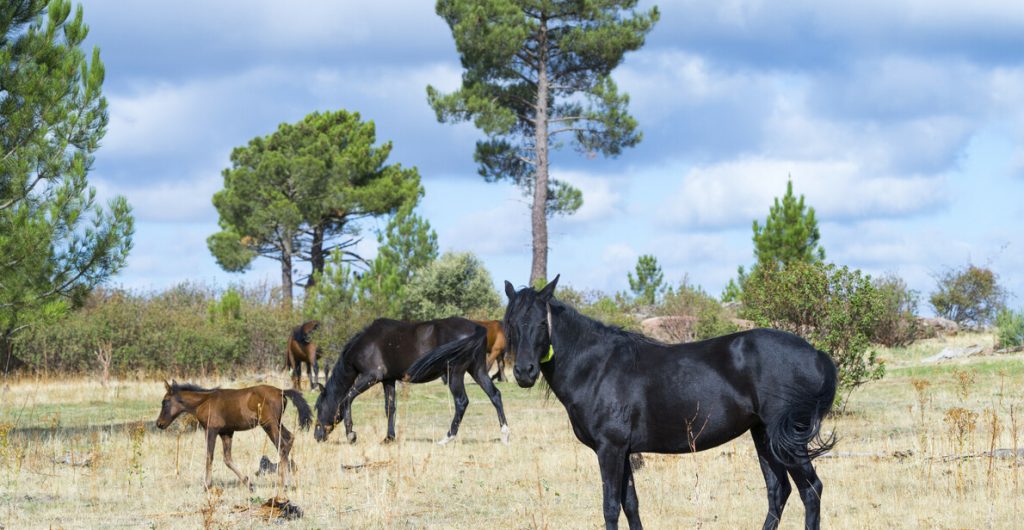 Serrano horses have been traditionally used for jobs such as threshing, and transporting people and timber, and were allowed to roam municipal forests when not working. They were also highly valued for breeding mules (a cross between a donkey and a horse). The arrival of mechanisation and rural depopulation in the 1960s and 1970s meant the breed ceased to have a function, and many animals were sold or slaughtered. Some horses were abandoned or escaped, managing to survive, breed and form wild herds in the mountains.

Despite this reprieve, the current status of the Serrano horse remains critical. By 2011 it was considered extinct, but recent surveys have identified enough animals to make a recovery feasible. These can be found in three of the four provinces in which they used to live, but with populations fragmented and isolated, there is a high risk of both crossbreeding and inbreeding.

Natural grazing is being stepped up across the Iberian Highlands with support from the Endangered Landscapes Programme, Cartier for Nature and the Arcadia Fund, the UK-based charitable trust of Lisbet Rausing and Peter Baldwin, with more horses scheduled for release in 2023. In addition, kulan (wild ass) will be released in arid areas of steppe. This will improve conditions for a host of bird species, including the Dupont’s lark, black-bellied sandgrouse, little bustard, and great bustard. A herd of Tauros were previously released in the Albarracín Mountains (at the southwestern end of the Iberian Highlands) in April 2021. 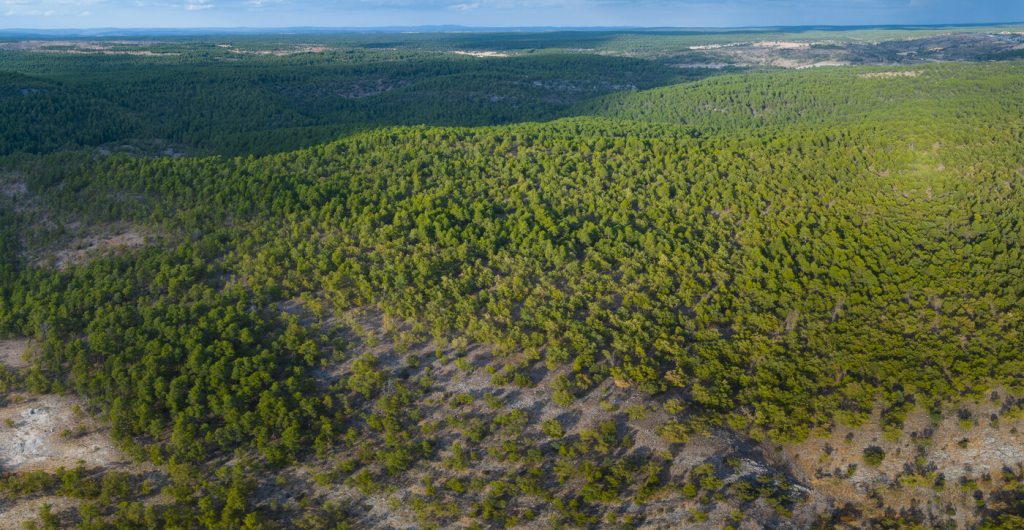 This article was originally published on the Rewilding Europe website. To find out more about the Iberian Highlands restoration landscape, visit the project page.