The future of sheep farming in degraded pastures

Farmers need more and more supplementary food to feed their sheep on the winter pastures of the Chachuna Managed Reserve in Dedoplistskaro, Georgia. Field experts say overgrazing and climate change are the main causes of pasture degradation – they believe that the environment here will only be protected from desertification if rotational grazing is implemented and the number of sheep on the pastures is controlled. 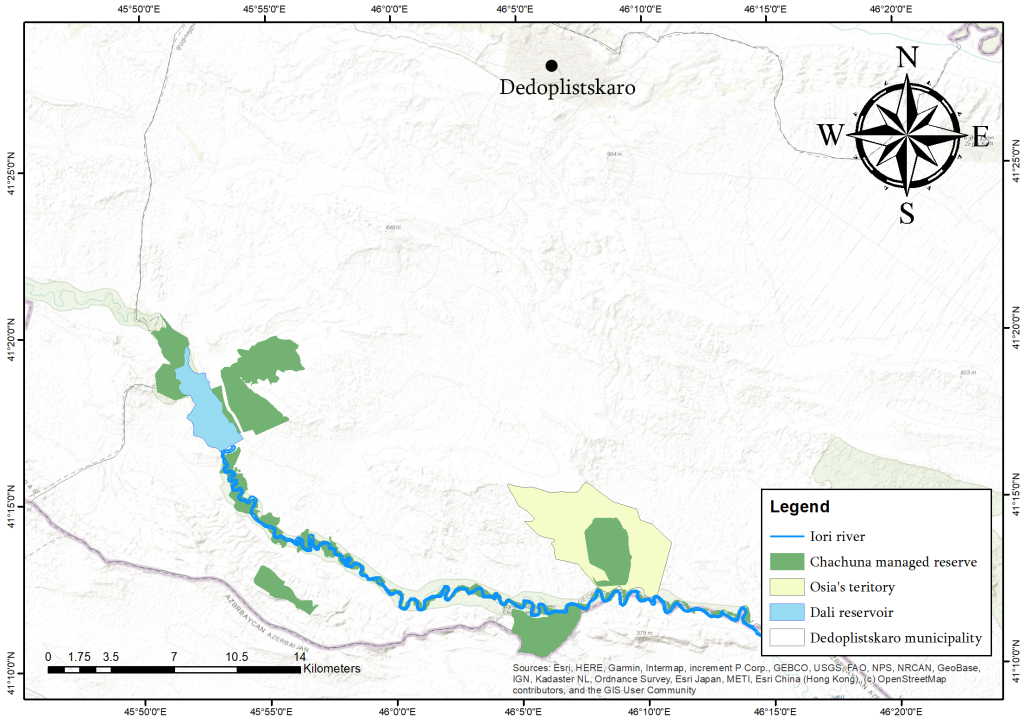 Map of the Chachuna Managed Reserve.

Chachuna Managed Reserve, made up of 5032 hectares of protected land, is 50 km away from the Dedoplistskaro Municipal Center, along the Iori river gallery forests. There are about 35 farms in this area, where for decades Georgian and Azerbaijani farmers have wintered around 50,000 sheep each year. Shepherds arrive in late November and move to the mountains and their summer pastures in May.

Giorgi Javakhishvili is a young farmer from Sagarejo. His father, Teimuraz, is one of the oldest shepherds here. The Javakhishvilis have two large farms with 3,000 sheep spread across 650 ha of pasture. One farm is at the beginning of the Managed Reserve and the other near the gallery forest of the river Iori. 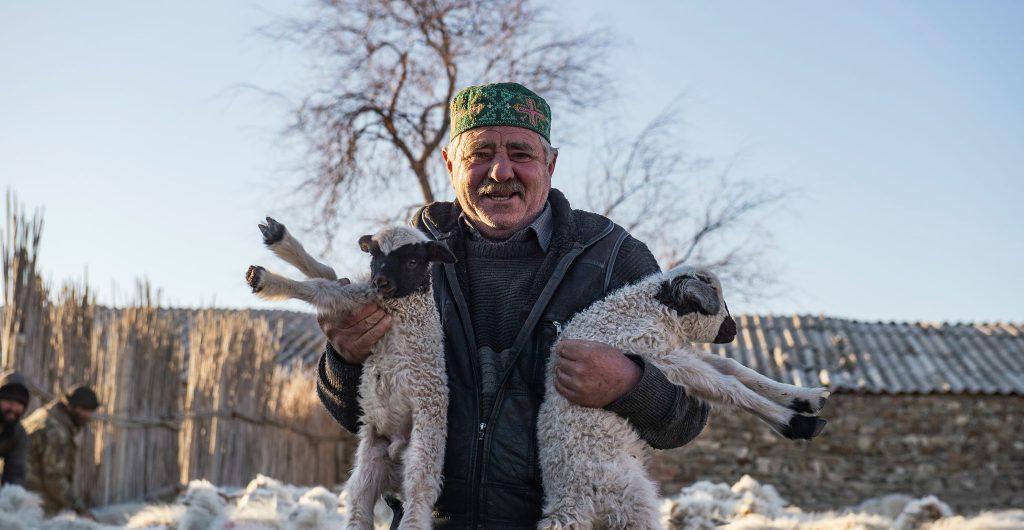 Teimuraz Javakhishvili has wintered sheep in the area for many years.

When I ask Giorgi whether he would like his children to follow the family tradition of sheep farming he says: “I’d prefer them to do something else. It is hard work, from year to year there is less grass here and feeding sheep is expensive for us.” This year, Giorgi has already bought barley worth 10,000 GEL (around £2,300) due to the lack of grass on his pastures and says that he will need the same amount again before May: “Last year I spent 20,000 GEL to feed the sheep well. There is no more grass, every year we encounter a worse situation than before.”

In 2019, Society for Nature Conservation (SABUKO), one of the ELP partners implementing the project in Georgia, conducted a pilot study on the soil and vegetation of 750 ha of the Chachuna Managed Reserve. Researchers were unable to find soil that was not degraded. The pasture load norms established in Soviet times recommended grazing 2-3 adult sheep on 1 ha of pasture. After the collapse of the Soviet Union, when shepherds living in Georgia lost access to the winter pastures of Kizlyar, the flocks were fully redistributed to the pastures of Dedoplistskaro. Consequently, the pressures on soil increased and in 2007, for example, when recommendations for grazing were developed for traditional use zones and protected areas, a maximum of 2 sheep per hectare were allowed to graze. Unfortunately, overgrazing in Chachuna is a widespread practice today. According to SABUKO representatives, there are up to 5-6 sheep per hectare. 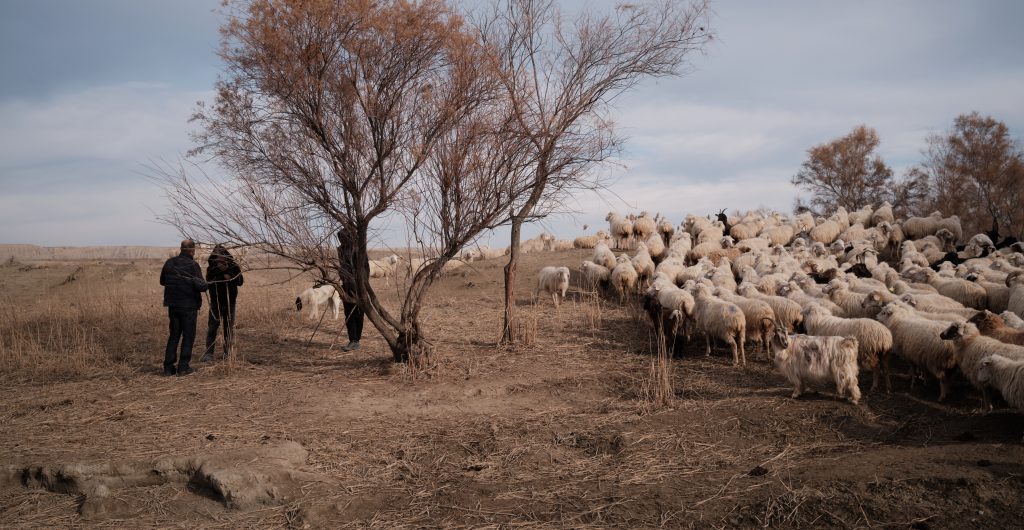 Overgrazing has led to significant degradation of the soil. The grassland is struggling to recover under this level of grazing pressure.

Sheep watering is also difficult. The infrastructure is underdeveloped and most farms do not have watering spots. Instead, sheep are taken to the river at least once a day. To do this, some herds travel three or four kilometres, destroying gallery forest and soil cover as they go. The Iori river valley is a protected area where sheep grazing is prohibited by law. But the penalty is only 50 GEL (around £12), so it is often worth it for the farm owners to let sheep graze and drink in the gallery forest and occasionally pay the fine. Tinatin Arveladze, Policy Manager at SABUKO, says “it is critical that shepherds understand the threats to biodiversity related to sheep grazing, and for the state to implement more effective tools to prevent livestock from entering the gallery forest.”

Based on the research undertaken in 2019, SABUKO decided to introduce a rotational grazing system to farmers – internationally recognised as one of the most efficient ways to combat desertification. So what is rotational grazing? It means resting the pasture for a time so vegetation can be restored and natural processes can renew the soil. Periods of restoration depend on various factors including: season, climate, vegetation, and number of sheep per hectare. 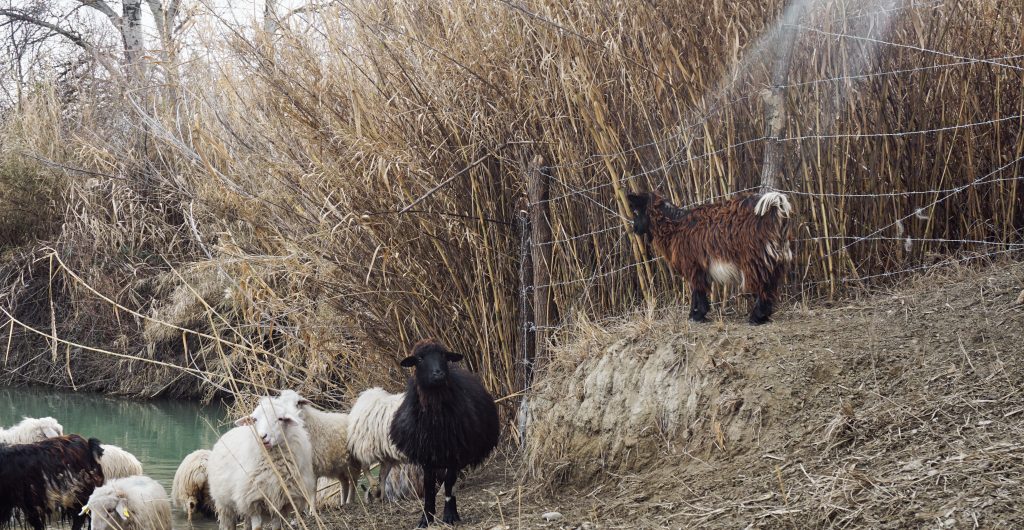 The corridors constructed by SABUKO should limit the damage sheep are doing to the gallery forest.

Marinus Gebhardt is a Resource Manager at SABUKO. In 2019-2020, he spent two winter seasons with the shepherds in the Chachuna Managed Reserve, trying to help them implement rotational grazing. Gaining trust took time, as the shepherds tend to be an isolated community, with few interactions with outsiders. Marinus explained his approach, “for the first time, I started working alone in their area. I wanted the shepherds to see what I was doing and ask me questions. The downside of this process is that it takes time to gain trust, but it is achievable, it just takes effort and patience.” After two months of field work, SABUKO developed a map of the Chachuna Managed Reserve and submitted recommendations in pasture management to the Agency of Protected Areas. This also showed the farmers that SABUKO planned to contribute to the restoration in the area seriously – they weren’t just passing through.

We have implemented a number of practical solutions to begin the restoration of the pastures and to protect the gallery forest. We have dug two wells and provided additional watering spots right at the farms, to remove the need to lead the flocks down to the river. Corridors were arranged in cooperation with the Agency of Protected Areas to prevent sheep entering the gallery forest,  threatening the existing ecosystem, and 5.5 km of fences were installed to protect fragile areas. To relieve grazing pressure we also built a bridge to allow sheep to graze fresh pastures. 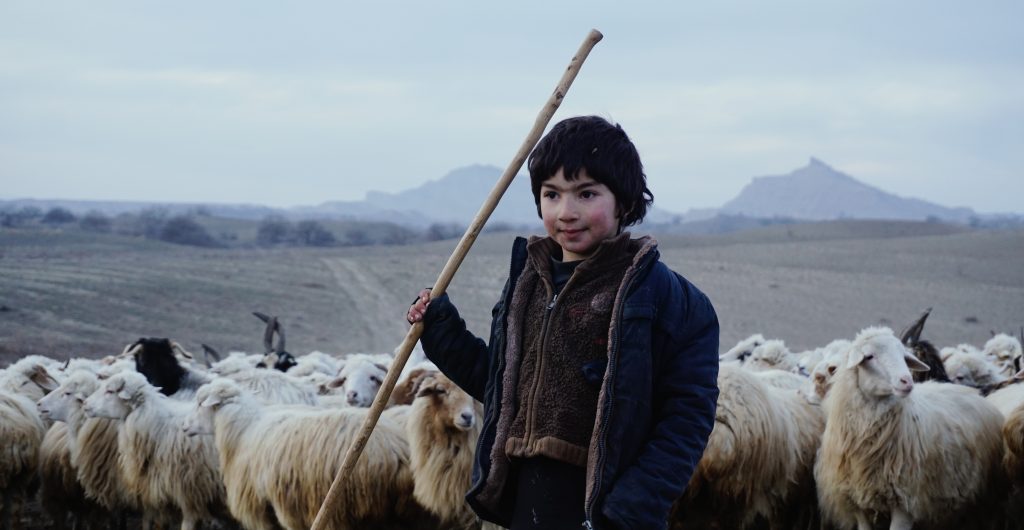 Careful management of the landscape, including rotational grazing, will restore the ecosystem for future generations.

SABUKO are now working with six sheep farmers, including Giorgi Javakhishvili, helping them implement rotational grazing plans, as well as providing financial and environmental advice. They will monitor the progress of these interventions, but with careful management, the soil should be able to recover, and the gallery forest should be protected from damaging erosion by thirsty sheep.